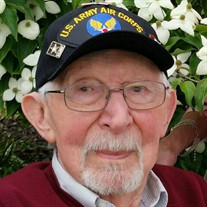 Ben Weinstein, 97, of North Augusta, entered into rest on December 25, 2019 at his daughter’s residence. Ben was born November 20, 1922 in Bismarck, North Dakota. He was a former resident of California, having made North Augusta his home for the past 9 years. He enjoyed living in North Augusta so he could be near his family. Ben belonged to the “Greatest Generation” and rose to the rank of Master Sergeant in the Army Air Corps during World War II as a Meteorologist with the 20th Weather Squadron in the Asiatic Pacific Theater. He graduated from UCLA with a degree in Accounting and worked for Douglas Aircraft and later as a Financial Consultant for many companies across the United States. Ben loved to travel, his last few years, with his daughter Leslie Clark and her husband Dennis. He especially enjoyed their trip to Washington DC and he loved their many trips to Edisto Beach. Ben was preceded in death by his beloved wife of 62 years, Carol Lea Weinstein. Survivors include a daughter and son-in-law, Leslie and Dennis Clark, North Augusta, SC; a son, Lauren Weinstein, Woodland Hills, CA; a granddaughter, Linda Musgrove (Nathan) two bonus grandchildren, Michael Clark (Amelia) and Katherine Green (Tom); three great-granddaughters, Gwendolyn, Grace, and Lydia Joy Musgrove; four bonus great-grandchildren, Sereana and Arianna Green and Liam and Toby Clark; a niece, Lorraine Weinstein, and two nephews, Greg Kourilsky (Marilyn) and Saul Weinstein. The family would like to extend special gratitude to several individuals: Ms. Emily Gomez, Ben’s amazing caregiver; Mrs. Carmen Girardin; Dr. Lee Merchen and all of the doctors and nurses at Augusta University Health Science for the wonderful care they gave him; and Encompass Home Health and Hospice with a special thank you to Crissy Waters. Ben will be interred at Fort Jackson National Cemetery in Columbia, South Carolina.

Ben Weinstein, 97, of North Augusta, entered into rest on December 25, 2019 at his daughter&#8217;s residence. Ben was born November 20, 1922 in Bismarck, North Dakota. He was a former resident of California, having made North Augusta his home... View Obituary & Service Information

The family of Ben Weinstein created this Life Tributes page to make it easy to share your memories.

Ben Weinstein, 97, of North Augusta, entered into rest on December...

Send flowers to the Weinstein family.