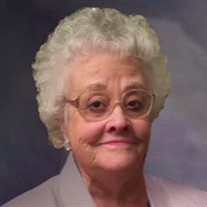 Marietta, GA – Graveside Services for Mrs. Bernice Edna DeWeese, 88, who entered into rest August 29, 2021, will be conducted Saturday afternoon at 2 o’clock in Jackson Memorial Park. Pastor Allen Cantrell officiating. The family will receive friends at the graveside following the service. Mrs. DeWeese was born in Ellenton, SC to the late Robert and Ella McLean. As a child, her family moved to her lifelong home of Jackson, SC. Mrs. McLean has made Marietta, GA her home in recent years. She was a dedicated member of Jackson Bible Church, where she was actively involved as a Sunday School teacher and choir director. Mrs. DeWeese was a talented artist, who employed her talents as a graphic designer creating print advertisement for several companies. She was also an avid musician, who had a passion for serving her church family with her musical talents as pianist and organist for many years. Mrs. DeWeese cared for her family as a homemaker and retired as a supervisor at the Savannah River Site with 25 years of service. Following her retirement, she filled the role as primary caregiver for both her mother and mother-in-law. Mrs. DeWeese will be fondly remembered as the backbone of her family, a fine Christian woman, and an adoring mother, who graciously shared her love and talents with her children. In addition to her parents, she was preceded in death by her husband, Wayne Franklin DeWeese. Survivors include a daughter, Donna DeWeese (Richard) Cook; two sons, Stephen (Susan) DeWeese and Roger DeWeese; two brothers, Charles (Carolyn) McLean and Thomas McLean; five grandchildren, Justin Franklin (Anna) Cook, Elliott Grayson Cook, Lauren (Donovan) Quesenberry, Ryan DeWeese, Sarah DeWeese; three great grandchildren, Grace Quesenberry, Donovan Quesenberry and Oliver Franklin Cook. Memorials may be made to Jackson Bible Church, 102 McElmurray Farm Road, Jackson, SC 29831. Posey Funeral Directors of North Augusta is in charge of arrangements (803.278.1181).

The family of Bernice Edna DeWeese created this Life Tributes page to make it easy to share your memories.

Send flowers to the DeWeese family.