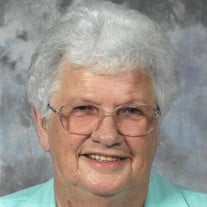 Jackson, SC—Private Graveside Services for Mrs. Betty Jean Muns, 84, who entered into rest September 16, 2020, will be conducted in the Jackson Memorial Park. Reverend Brian Henderson officiating. Those in attendance are encouraged to wear a mask and social distancing will be practiced. Mrs. Muns was a native of Blackville, SC, having made Jackson her home for the past 56 years. She was a member of the First Baptist Church of Jackson. Mrs. Muns was a textile worker having been employed by Coordinated Apparel until its closing and then retired from the Depot in Jackson. She enjoyed working in her yard with her flowers. Mrs. Muns was predeceased by her husband of 55 years, Robert C. Muns, parents, Sam and Eva Hutto, a sister, Barbara Ann Moore and four brothers, Sam B. Hutto, Jr., Harry A. “Bubba” Hutto, Clyde F. Hutto and Ronnie Hutto. Survivors include her daughter, Linda Muns Jarvis and her fiance’, Jerry Jackson; two grandchildren, Robin (Kevin) Dixon and William H. “Trey” (Kayla) Lariscy; two great grandchildren, Abby Dixon and Hampton Lariscy; a sister, Loretta Muns; a brother, Tommy Hutto; a sister-in-law, Connie Hutto; several nieces and nephews. In lieu of flowers, memorials may be made to First Baptist Church of Jackson, P.O. Box 130, Jackson, SC 29831. Posey Funeral Directors of North Augusta is in charge of arrangements (803-278-1181). Visit the registry at www.PoseyCares.com

Jackson, SC&#8212;Private Graveside Services for Mrs. Betty Jean Muns, 84, who entered into rest September 16, 2020, will be conducted in the Jackson Memorial Park. Reverend Brian Henderson officiating. Those in attendance are encouraged to... View Obituary & Service Information

The family of Betty Jean Muns created this Life Tributes page to make it easy to share your memories.

Send flowers to the Muns family.