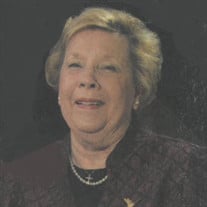 Augusta, GA—Private Graveside Services for Mrs. Clara Weeks Stanton, 87, who entered into rest November 26, 2020, will be conducted in Pineview Memorial Gardens. Mrs. Stanton was a native of North Augusta, a former resident of Savannah for over 50 years, having made Augusta her recent home. She was a 1951 graduate of North Augusta High School and a 1955 graduate of the University of South Carolina. While living in Savannah she and her husband Frank were members of the Epworth United Methodist Church and founding members of the Skidaway Island United Methodist Church and in Augusta, they attended Wesley United Methodist Church of Evans. She was a member of The Daughters of the American Revolution and the PEO. Mrs. Stanton was predeceased by her husband of 65 years, Frank C. Stanton, Sr., and her parents, Rudolph and Margaret Weeks. Survivors include a son, Stan Stanton, Evans; a daughter, Claire (John) Wells, Savannah Lakes; five grandchildren, Toney (Bonnie) McCallum, Jennifer Claire (Miles) Brantley, Tripp Stanton, Caroline Stanton and Christopher (Jennifer) Jarrett; two great grandchildren, Chloe McCallum and Owen McCallum. In lieu of flowers, memorials may be made to the Margaret Weeks Scholarship Fund c/o North Augusta Council of Garden Clubs, 165 Double Eagle Court, Aiken, SC 29803. Posey Funeral Directors of North Augusta in charge of arrangements (803-278-1181). Visit the registry at www.PoseyCares.com

The family of Clara Weeks Stanton created this Life Tributes page to make it easy to share your memories.

Send flowers to the Stanton family.