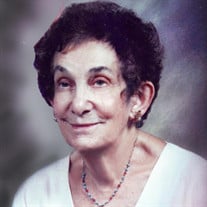 Mrs. Clara Cecelia Punaro Tantillo, 99, of North Augusta, SC, entered into rest March 8, 2020. In consideration of the extraordinary circumstances associated with the Coronavirus, the family will hold a private funeral service for Mrs. Tantillo on Saturday. A public memorial service will be announced at a later date. Clara Cecelia Punaro Tantillo was born the fourth of five children in Augusta, Georgia, to parents Egidio “Edward” Punaro and Madelene Campiglia Punaro on January 29, 1921. She attended grammar school at Sacred Heart and high school at Mount Saint Joseph’s Academy, where she graduated as class valedictorian and winner of 1st Honors in Religion and French. After high school, she attended Augusta Junior College, presently Augusta University. However, the financial realities of the Great Depression forced her to terminate her college studies after completion of her first year in lieu of enrolling in Kerr Business School of Augusta. Upon completing courses at Kerr, she embarked on a business career holding positions at Clearwater Finishing Plant in South Carolina, and the Walker Insurance Company and Claussen Lawrence Construction Company, both of which were located in Augusta. Upon the outbreak of World War II, she served as a volunteer at the United Service Organization (USO). While at a USO event in Augusta, she would meet and eventually marry her husband of 75 years, Anthony “Tony” Tantillo. Together they were joined in holy matrimony on July 5, 1943, at the Church of the Sacred Heart in Augusta. With the completion of the war and Tony’s return from deployment in Europe, they would settle in North Augusta, South Carolina, where they would raise nine children – Nina, Thomas, Madeleine, Antionette, Teresa, Angela, Anthony, Mario and Augustine. She would excel in motherhood, bringing to bear a set of varied talents. She was a skilled seamstress, making virtually all of her children’s clothes in their younger years, and a wonderful cook and baker. Using the accounting skills honed during her career, she efficiently managed the financial affairs of not only the household, but also the family grocery business. She also imparted to her children a great appreciation for the fine arts, a heightened emphasis on the value of education, a love of animals, a love of the holidays, a love of family and a love of the Christian faith. As devout Catholics, Clara and Tony were founding members of Our Lady of Peace Church in North Augusta, where they participated in the groundbreaking for the original church sanctuary in the Spring of 1946. Her faith, however, was best exhibited in a set of uncommon attributes: a constant display of extraordinary courtesy, even when circumstances may not have warranted it; an unwavering commitment to husband and family; and a daily willingness to sacrifice her own self-interest for the betterment all those entrusted to her. In doing so she modeled the teachings of Christ as described by Saint Francis of Assisi over 800 years ago: "For it is in giving that we receive, it is in pardoning that we are pardoned, it is in dying to self that we are born to eternal life." Clara Cecelia Punaro Tantillo – daughter, sister, aunt, wife, mother, grand- and great-grandmother – a woman of great courage, wisdom, virtue and grace. In lieu of flowers, memorials may be made to the Scared Heart Cultural Center, 1301 Greene Street, Augusta, GA, 30901 or The Church of the Most Holy Trinity, 720 Telfair Street, Augusta, GA, 30901.