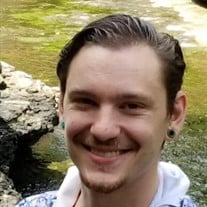 Woodbury, TN—The Celebration of Life for Daniel Arthur Katterjohn, 30, who entered into rest December 14, 2021, will be held Saturday morning, January 8, 2022, at 11 o’clock in the Worship Center at First Baptist Church of North Augusta with Rev. Patrick Harmon and Rev. John Gage officiating. For those who are unable to attend, the service will be livestreamed on Sandy Carlson Katterjohn's Facebook page. Daniel was born in Atlanta, Georgia, a former resident of Augusta, Georgia, having made the Nashville, Tennessee area his home for the past four years. As a hard worker and quick study, he worked his way up to Quality Control Technician with Schneider Electric. Combining his quick wit for jokes and movie quote knowledge with his gentle spirit, Daniel had the incredible ability to make people feel at ease around him. He enjoyed spending time with his family and friends. With a passion for sports and football, he fiercely competed in the Cousin's Fantasy Football League, loved cheering on his favorite NFL team, the Atlanta Falcons, and regularly played disc golf, sharing his hobby with his mom, siblings, cousins, and friends. He loved many genres of music, especially supporting his cousins' bands and musical endeavors. Daniel was very knowledgeable about Japanese culture and continued to listen to podcasts to increase his knowledge of various topics of interest, all while striving to be the best dressed in any given place. He was all these wonderful things and so much more! Daniel was preceded in death by his paternal grandfather, Arthur David Katterjohn and his uncle, Robert Carlson. He leaves behind his parents, Mike and Sandy Katterjohn, Augusta, GA; four sisters, Nicole (Travis) Barber, Thomaston, GA, Naomi (Grant) Kimbrell, Augusta, GA, Julia Katterjohn, Nashville, TN and Ansley Katterjohn, Grand Rapids MI; one brother, Paul Katterjohn, Augusta, GA; one niece, Carolina Barber and one nephew, Travis Barber, II, Thomaston, GA; his paternal grandmother, Rosemary Katterjohn Greenwood, Austin, TX; his maternal grandparents, Daniel and Margaret Pluister, Tinley Park, IL; a number of aunts, uncles, and cousins; his special fur babies, Yuri and Blu. Posey Funeral Directors of North Augusta is in charge of arrangements (803-278-1181). Visit the registry at www.PoseyCares.com

Woodbury, TN&#8212;The Celebration of Life for Daniel Arthur Katterjohn, 30, who entered into rest December 14, 2021, will be held Saturday morning, January 8, 2022, at 11 o&#8217;clock in the Worship Center at First Baptist Church of North... View Obituary & Service Information

The family of Daniel Arthur Katterjohn created this Life Tributes page to make it easy to share your memories.

Send flowers to the Katterjohn family.