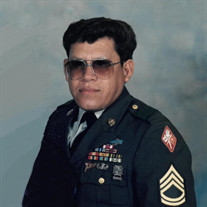 SFC David C. Dominguez, USA, Ret. Trenton, SC – Graveside Inurnment Services for SFC David C. Dominguez, USA, Ret., 77, who entered into rest August 3, 2020, will be conducted Monday afternoon, August 10, 2020 at 2 o’clock in Ft. Jackson National Cemetery with Full Military Honors. Rev. Chris James officiating. A Memorial Service will be conducted Saturday, August 29, 2020, at 3 o’clock at Whole Life Ministries. The family will receive friends at the church following the service. Mr. Dominguez was a native of Roswell, NM, having made Trenton, SC his home of the past 38 years. He was a retired U.S. Army veteran, having proudly served for 24 years as an Airborne Ranger with multiple tours of combat service in Vietnam. During his military career, he had assignments in Germany, Korea and Alaska. Mr. Dominguez also served as an instructor of both the Jump School at Ft. Benning, GA and the Signal School at Ft. Gordon, GA. While at Ft. Gordon, also served on the funeral detail, rendering honors for his comrades. Mr. Dominguez was currently employed with AT&T as a R.F. Engineer and was member of Whole Life Ministries, where he thoroughly enjoyed serving as an usher. He was an avid outdoorsman who loved to fish and tend to his yard. Mr. Dominguez had a strong work ethic, was a man of his word and always encouraged others. He truly had a servant’s heart and constantly gave of himself, blessing the lives of everyone around him. Mr. Dominguez will be fondly remembered as a godly man who lived his faith and loved his family, especially his wife, daughter and grandchildren. He was preceded in death by his brother, Rudolph “Roy” Dominguez and a brother-in-law, Homer Zapeda. Survivors include his wife of 43 years, Jane Dominguez; a daughter, Candice (Jeffery) Anderson, three grandchildren, Summer Violet Anderson, Kaitlyn Patricia Anderson, Bayleigh Hope Anderson; four sisters, Mary Hope Zapeda, Dorothy Carrasco, Rosemarie Fuentes, Jeannie Montoya; a brother, Billy Joe Montoya; and a great-niece, Hailey Anderson. Mr. Dominguez adored his blended family of siblings, nieces, nephews and cousins. In lieu of flowers, memorial donations may be made to benefit the higher education of Mr. Dominguez’s beloved grandchildren, In His Memory College Fund, c/o SRP Federal Credit Union, P.O. Box 6730, North Augusta, SC 29861 or delivered to any SRP Federal Credit Union branch location. Posey Funeral Directors of North Augusta is in charge of arrangements (803)278-1181.

The family of SFC David C. Dominguez, USA, Ret. created this Life Tributes page to make it easy to share your memories.

Send flowers to the Dominguez, family.