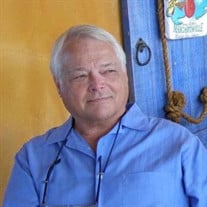 Not sure what to send?

Mr. Rodney Kight, 75, husband of Page Holladay Kight, entered into rest December 29, 2021, at Hilton Head Hospital after a brief illness. A celebration of life service for “a life well-lived and a man well-loved” will be held at 2:00 pm on Sunday, February 27, 2022, at Grace United Methodist Church in North Augusta, SC. The Reverend Thomas B. Wilkes, III, The Reverend Dr. Michael Andrews and the Reverend Masaki Chiba will officiate. Mr. Kight’s family will receive friends at the church following the service. Rodney was born July 8, 1946 in Charleston, SC, to the late William Augustus Kight and Aline Denman Kight. He moved with his family at a young age from Charleston to Williston, SC. Shortly thereafter, he settled permanently in North Augusta, SC. Rodney graduated from North Augusta High School in 1965. He studied Psychology and earned a degree in Business Administration from Augusta State University. Rodney served in the Army National Guard as a medic from 1967-1974 and earned the coveted “Trainee of the Cycle” award. After college, Rodney worked at Georgia Regional Hospital. He followed his passion for music, audio equipment, and high-fidelity sound reproduction by working as store manager for Stereo City and Tape Village in Augusta, GA, and later by going into business for himself, opening Professional Sound, a high-end stereo shop and installation center. After his entrepreneurial venture, Rodney worked in finance in several capacities, including for Bechtel Corporation at the Savannah River Site and for Royal DSM in Augusta, GA. After retiring, Rodney served as Chief Financial Officer at Medex Corporation and Carolina CoverTech. At the time of his passing, he was employed part-time at Grace United Methodist Church. Rodney was a true servant of God and always looked for ways to serve and help others. In 1990 he was honored with Sertoma Club’s “Service to Mankind” award. In 1991 he received North Augusta Chamber of Commerce’s “Citizen of the Year” award. Rodney served his churches, St. John United Methodist, Fairview Presbyterian Church, and Grace United Methodist Church, by teaching, by working with youth groups, by serving as a Deacon and an Elder, by playing guitar for musical offerings, and by setting up and running sound systems for services and programs. He provided music and sound for school, church, and community events for over 50 years. Rodney loved children and had an easy rapport with them. He voluntarily coached youth football, basketball, and baseball for 25 years. He also enjoyed boating on the lake with family and friends and found joy in teaching countless youth how to water ski. Rodney was a gifted guitarist and lifelong music lover. He began performing with bands when he was 13 years old and continued playing in groups until the time of his passing. He taught his sons to play guitar, supported their bands, and inspired many of their friends to play music. He was well-respected throughout the CSRA for his knowledge and skill as an audio engineer. More recently, he taught guitar lessons to local youth. In addition to his wife, Rodney is survived by his children, Rod Kight (Ashley), Ryan Kight, Cory Harrison and a special daughter-in-law, Ashley Kight; his siblings Melinda Kight Carter (Buck), Libby Kight Rushing (David), Coni Kight Bullington (Darrell), and Rocky Kight (Kathy); and his grandchildren Lily Kight, Abby Kight, Henry Kight, Cooper Kight, Zoey Kight, Roscoe Brittingham, Bowie Brittingham, Henry Poteet, Will Poteet, and Emmeline Poteet. He loved and was loved by many nieces and nephews. In addition to his parents, he was preceded in death by his brothers Kenny Kight and Duke Kight (Sue). In lieu of flowers, memorials may be given to the choir fund at Grace United Methodist Church, 639 Georgia Avenue, North Augusta, SC 29841, or St. Jude Children’s Research Center, Memorial Giving, 501 St. Jude Place, Memphis, TN 38105. Posey Funeral Directors of North Augusta is in charge of arrangements (803-278-1181). Visit the registry at www.PoseyCares.com

Mr. Rodney Kight, 75, husband of Page Holladay Kight, entered into rest December 29, 2021, at Hilton Head Hospital after a brief illness. A celebration of life service for &#8220;a life well-lived and a man well-loved&#8221; will be held at... View Obituary & Service Information

The family of Don Rodney Kight Sr. created this Life Tributes page to make it easy to share your memories.

Send flowers to the Kight family.