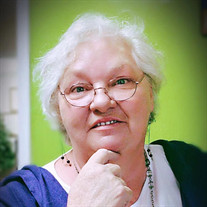 Doris Hoffman Dobson North Augusta, SC – Private Memorial Services for Mrs. Doris Hoffman Dobson, 70, who entered into rest October 3, 2021, will be conducted at a later date. Mrs. Dobson was a native of Charleston, WV and a former resident of New Orleans, LA and Houston, TX, having made North Augusta, SC her home for the past 15 years. She thoroughly enjoyed her career with Walton Options as an Independent Living Advocate, prior to her retirement. Mrs. Dobson truly had a servant’s heart and offered selfless love to everyone, never meeting a stranger. She was a beautiful person in every way, truly an angel on earth. Mrs. Dobson was not blessed with children of her own however, she was a mother to many. She enjoyed caring for others and made sure her home was open and inviting to her family and friends. Mrs. Dobson adored her family, especially her husband and sweetheart of 37 years, Lawrence. They were indeed soulmates and had a tremendous love for one another. She had a passion for the outdoors, loved flowers and animals and was known as an “animal whisperer.” Mrs. Dobson was very spiritual woman and had a deep appreciation for the little things in life. She will be fondly remembered and loved by all who knew her. Mrs. Dobson was preceded in death by her parents, Carl and Lola Hoffman; two brothers, Albert “Bud” Hoffman and Jess Hoffman; two sisters, Carol Maddox and Katie Williams; a step-daughter, Sandra “Sandy” Dobson; and a beloved pet, Sunshine. In addition to her husband, survivors include two brothers, Dale Hoffman and Dennis “Dink” Hoffman; a step-son, Lawrence Dobson, Jr.; a step-daughter, Dr. Genevieve Dobson; step-grandsons, Devante’ Harris and Alexander Lesan H. Dobson; and many nieces and nephews who she considered her children. In lieu of flowers, memorials may be made to Walton Options, 514 West Avenue, North Augusta, SC 29841 or www.waltonoptions.org Posey Funeral Directors of North Augusta is in charge of arrangements (803)278-1181.

The family of Doris Hoffman Dobson created this Life Tributes page to make it easy to share your memories.

Send flowers to the Dobson family.