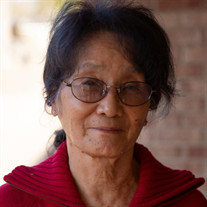 North Augusta, South Carolina - Eiko Winn's husband of more than 50 years might have been a soldier, but Eiko Nakao Winn was the fighter. At a young age, she suffered rheumatic fever. Doctors said her heart would be damaged physically, and it was. But no one could have predicted the strength or size of her heart nor that she would go on to survive and thrive multiple heart surgeries and live a full life. Born in 1936, she escaped a war in Japan and came to the United States to face a whole new battle. At the young age of 21, her Japanese heritage was not entirely welcomed when she followed her newlywed husband stateside, but she was brave. Her bravery would allow her to make and run a home when her husband was sent to serve in Vietnam, leaving her stateside with two very young daughters to raise, a small command of the English language, and a North Carolina driver's license she received just days before her husband's deployment. Towering less than 5 feet tall and hovering around 100 pounds for most of her adult life, Mrs. Winn would continue to be one of the strongest figures in her family. She was a mother to two girls...twice. When Mrs. Winn's older daughter, Elizabeth Ann, was shot and killed in 1994, Mrs. Winn, along with her husband, stepped in to raise their two granddaughters Kirsten Ashley and Lauren Elizabeth. She paused her late-in-life career as a seamstress, trading elaborate wedding dresses for children's fashion. Even years later, whether it was a custom hanten kimono jacket or a coat for a Disney villain in the school play, Mrs. Winn stitched love into every creation she made for her family. When she wasn't sewing, she was singing. Before COVID put her Japanese women's club, Sakura Kai, in a lockdown, she was known to stay out until 2:30 in the morning singing karaoke. (I can only hope that as her daughter, when I'm in my 80's, I have the zest to stay out late singing with friends). Singing karaoke with the Japanese women is where she met her best friend "AmiSan," who, as fate would have it, lived one street over in her neighborhood and would become part of her family away from Japan. Happy to be independent and live on her own for a short while after her husband passed in 2016, Mrs. Winn finally relented to surrendering her driver's license when she was 80 and moved in with her daughter and her family. Her daughter, Estelle Sakura, had an addition built onto their home. Her family called it "the West Wing." She called it her "castle," but everyone knew it was home. Mrs. Winn loved spending time with family. She traveled back to Japan often. She made annual family trips to NYC where days and nights consisted of experiencing the best Japanese restaurants and markets. She regularly cooked for her family and looked forward to exploring every new Japanese restaurant and market we could find in a 100-mile radius. She enjoyed growing flowers and Japanese vegetables in her backyard garden. She loved watching baseball, especially the New York Yankees and Seattle Mariners. She overheated two Amazon Firesticks watching her Japanese subscription TV around the clock, even when she was asleep (though she said she was "just resting her eyes"). At 84-years-young, defying the odds and her life-long heart ailments, Eiko Nakao Winn died peacefully in her home January 21, 2021. Preceding her in death, her husband Ronald Dean, her older daughter, Elizabeth Ann, and two sisters, Kazue Yamafuji, and Toshiko Saitou. To carry on in her spirit, she leaves her younger daughter, Estelle Sakura, the daughter she jokingly called her "son-in-law", Meredith Martin, three granddaughters: Kirsten Ashley, Lauren Elizabeth, and Ella Jane, two great-grandsons David and Paul, along with her Japanese brothers and sisters, Tokihisa Nakao, Junko Iwase, Hiroko Tsukioka, Koumei Nakao, and Michiyo Ono, and their families. Mrs. Winn will be laid to rest in a private family service Saturday morning at Pineview Memorial Gardens. Our family would like to extend our deepest appreciation to the caretakers from Home Instead and Comfort Keepers who helped our family make it possible for Mrs. Winn to spend her final days at home with family.

North Augusta, South Carolina - Eiko Winn's husband of more than 50 years might have been a soldier, but Eiko Nakao Winn was the fighter. At a young age, she suffered rheumatic fever. Doctors said her heart would be damaged physically, and... View Obituary & Service Information

The family of Eiko Nakao Winn created this Life Tributes page to make it easy to share your memories.

Send flowers to the Winn family.