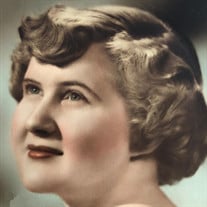 Funeral Services for Mrs. Elizabeth Tanner Fair, 86, of Snellville, Georgia, who entered rest February 9, 2022, will be conducted Saturday at 12 noon from the First Baptist Church of Louisville, Georgia. Reverend Jonathan M. Melchior officiating. Interment in Louisville City Cemetery. Elizabeth T. “Libby” Fair was born on August 23, 1935 to Alvie and Bessie McDaniel Tanner of Louisville, GA. Alvie was a large farm property manager for T. B. Kelly on the Arrington Place; Bessie was a server in the Louisville Academy lunchroom. Though Libby and Roy were a high school grade apart, they began a courtship that continued after Roy’s graduation and enrollment at Georgia Tech where he entered AFROTC program (Korean War Era) while pursuing his degree in Industrial Management and an eventual USAF commission as a Second Lieutenant. Their abiding love for each other led to marriage on December 27,1953, that lasted for 68 years. Upon graduation, Roy received a 2/LT commission, the couple moved to Texas where their first child (Debbie) was born. Roy earned his navigator wings and completed Electronic Warfare training in Biloxi, MS where their second child (Kim) was born. Follow-on operational flying assignments took them to Shaw AFB, SC, then to Elmendorf AFB, AK where their son Alan was born. Assignments followed in Kansas where Libby became a stay at home/raise the children mom, while Roy deployed several times around the world over a 3-year period. Girl Scouts offered a source of distraction from his absence, an adventure that lured her into a leadership position that fostered her interest in children of lesser advantage and care than her own and that planted the seeds of what might be done about that. Roy’s next assignment took them to Syracuse University where deployments ended as Roy earned his Master’s Degree and 18 months of down time to rejuvenate the family. However, the Vietnam War was in full force, and Roy’s skill sets were needed. Libby and the kids returned home to Louisville where she reengaged with local interest to rejuvenate a struggling group of girls by starting Louisville’s first Girl Scout Troup. Mary Francis Pilcher and Bob Bethea took her under their wings and provided much needed mental relief to shield her from news on the war front. A weeks R& R with Roy in Hawaii aided her morale immeasurably. Their next family venture was in San Antonio, TX where Roy was assigned to a 3-year major command headquarters career broadening assignment in the Manpower career field, awarded his third Distinguished Flying Cross (Vietnam) and promoted to Colonel. It was a fun family place in many ways—Roy volunteered to be a Little League Coach for 9-10 year olds. Libby was brought home the league trophy. The Texas hill country had a special allure and a new ski boat brought friends of our kids to our door for weekends of fun. Following this 3-year stint, the family was off again for Roy’s 1 year follow-on assignment to the prestigious Air War College in Montgomery, AL, which provided little opportunity for community related activity. From there they moved to Tactical Air Command headquarters at Langley AFB, VA where the family immediately engaged in Little League baseball coaching and Senior Girl Scout coaching for 3 years and Wives Club activities. Libby was a personal favorite of the Four Stars Commander (General) wife as they shared the same values about leadership of children (and people). It was Roy’s and Libby’s 3 years of work, at this level, that led the General to select them to go to Eglin AFB, FL to clean up his dissatisfaction with the Electronic Warfare Deputate, where Roy’s skill set lay with a 2-star boss. Working together, it took 6 of months to rebuild a functional organization committed to excellence of high tech performance that command required. Libby engaged with both officer and airmen’s wives with sincerity of purpose, and it was most rewarding. For all, it became fun to go to work as it should be. With their kids out of the nest, Libby chose to fill a void in her life's work with abused kids. She went downtown and engaged with the state (Florida) people who seek to prevent child abuse. She took a course and moved to volunteer work going into homes where child abuse was reported to seek correction or removal if warranted. She was so good at it that the presiding judge(s) would invite her into private quarters to seek her wisdom on the appropriate action to take. She was an angel of God. Survivors include her husband of 68 years, Roy V. Fair; a son, Sam (Kathryn) Fair, Hoover, Alabama; two daughters, Deborah Elaine Fair Geise (David Edward), Conyers, Georgia and Kimberly Lynn Krumm, Houston, Texas; five grandchildren, Matthew Ryan Fair, Hunter Ross Fair, Kyle Tanner Geise, Lindsay Weber Gilbert and Megan Kristin Diba. Pallbearers will be Sam Fair, Matthew Fair, Hunter Fair, Kyle Geise, Charlie Gilbert and Mitch McGraw. Memorials may be made to St. Jude Children's Research Hospital, 501 St. Jude Place, Memphis, TN, 38105. The family will receive friends at the Church one hour prior to the service. Posey Funeral Directors of North Augusta in charge of arrangements (803-278-1181). Visit the registry at www.poseycares

The family of Elizabeth "Libby" Tanner Fair created this Life Tributes page to make it easy to share your memories.

Send flowers to the Fair family.