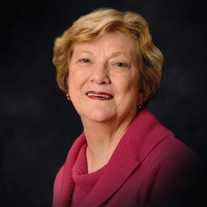 North Augusta, SC—Funeral Services for Mrs. Frances Wheatley, 79, who entered into rest January 13, 2020, will be conducted Friday afternoon at 2 o’clock at Sweetwater Baptist Church with Dr. Paul Noe officiating. Interment in Sweetwater Baptist Church Cemetery. The family will receive friends at the funeral home Thursday evening from 5 until 7. Mrs. Wheatley was a native of Greenville, SC, a former resident of Fayetteville, GA, having made North Augusta her home for the past 12 years. She was a member of Sweetwater Baptist Church and the Women’s Missionary Union. Mrs. Wheatley was a homemaker and enjoyed stamping and creating beautiful greeting cards. She was preceded in death by her parents, Stephen Jones and Annie Lee Cape Jones and beloved brother, Sam Jones. The family would like to express their appreciation to her caregiver Lynda and to Sherry and Cheryl with Regency Hospice for the care they provided during Mrs. Wheatley’s illness. Survivors include her husband of 59 years, Ronald Wheatley; her daughter and son-in-law, Julie and Bill Little, North Augusta, SC; two grandchildren, Benay (Kevin) Byers and Andrew Little; two great-grandchildren, Elijah Byers and Lilly Byers; a sister-in-law, Dale Jones, Anderson, SC; several nieces and nephews. Pallbearers will be Bill Little, Andrew Little, Kevin Byers, Elijah Byers, Jerry Hawkins and Jim Reece. Memorials may be made to Sweetwater Baptist Church Building Fund, 198 Sweetwater Road, North Augusta, SC 29860. Posey Funeral Directors of North Augusta is in charge of arrangements (803-278-1181). Visit the registry at www.PoseyCares.com

The family of Frances Wheatley created this Life Tributes page to make it easy to share your memories.

Send flowers to the Wheatley family.