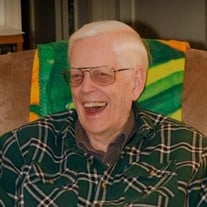 North Augusta, SC – Fred Russell Williams, Jr., North Augusta, SC, entered into rest February 24, 2020. Born in Boston, MA and raised in Wilkes-Barre, PA, Mr. Williams was the son of the late Fred Russell and Hazel Marion Warnick Williams. He lived in North Augusta area since 1964. He served in the U.S. Air Force for four (4) years in Columbus, Ohio as a Radar Maintenance Technician. He was later employed by Burroughs/Unisys Corporation for 36 years as a Field Service Engineer and was retired in 1997. Fred was active in several bowling leagues, and later he and his wife, Margaret, were active Square and Round Dancers for more than 35 years, having been members of several Dance clubs in Augusta, GA and Columbia, SC. In 2003, after many years of research, he published a 910-page genealogy book titled Williams Genealogy: Matthew, Thomas, Miles and Swain; 1623 – 2003. Survivors include his wife of 55 years, Margaret Z. Williams; daughter, Lynne W. (Nate) Wolfe of Fayetteville, TN; son, Russell L. Williams of Thomson, GA; two grandchildren and several great-grandchildren. He was predeceased by his parents and fraternal twin sisters: Joanne W. Ellis of Bethlehem, PA, and June W. Turley of Midland, MI. Services will be private, and at the convenience of the family. Final resting place will be in Highlands Memorial Park, Highlands, NC. In lieu of flowers, memorials may be made to the Thornwell Home for Children, 302 South Broad Street, Clinton, SC 29325-9972.

The family of Fred Russell Williams Jr. created this Life Tributes page to make it easy to share your memories.

Send flowers to the Williams family.