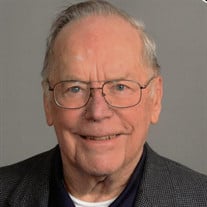 North Augusta, SC—Funeral Services for Mr. George A. Nelson, 90, who entered into rest December 7, 2021, will be conducted Saturday afternoon at 2 o’clock from the Posey Funeral Chapel. Pastor David Hunter officiating. Interment will follow in Pineview Memorial Park with Veteran Honors. The family will receive friends at the funeral home Saturday from 12 noon until the hour of service. The family respectfully requests those in attendance please wear a mask. For those unable to attend, the service will be livestreamed at http://www.poseyfuneraldirectors.com/obituaries/permalink/10280869/LTWebcast George Nelson was born in Kansas City Missouri in 1931 and lived most of his younger years in neighboring Kansas. As a youth, George earned his Eagle Scout designation, was an active member of Demolay (a service-based organization), and in high school was a member of band, ROTC, and the track and field club. George graduated in 1953 with a BS degree in Civil Engineering from Kansas State College (now Kansas State University). After college, George joined the Air Force where he ascended to the rank of Captain before leaving active service in 1955. After his service in the Air Force, George returned to Kansas State College where in 1957 he received his MS degree in Civil Engineering. More than anything else, George was a family man. For over 50 years - from 1957 to 2014 - he was a devoted husband to his wife Marcia who preceded him in death. All those that know George will remember him foremost as a man whose life was eternally enriched by his wife and family. George’s first full-time employment in 1957 was with Black & Veatch (2nd largest engineering consulting firm worldwide), where he worked out of their Kansas City office. Black & Veatch subsequently sent him to locations like Puerto Rico (where he lived for almost a year) and Nebraska (6 months). The next stop with Black & Veatch would have been Cairo, but he opted for a life more kind to his young family and moved to Augusta GA, accepting a position with Patchen & Mingledorf in late 1964; the family relocated to North Augusta SC in January 1965. In 1972, George opened his own engineering consulting business on Georgia avenue (in North Augusta, SC). He joined CD Williams circa 1976 and in 1979 joined ZEL (Zimmerman, Evans & Leopold). In 1988, George permanently struck out on his own. He kept his own structural engineering consulting business in operation until 2011 (he was almost 80 years old), when his wife’s illnesses required him to devote more full-time attention to her needs. George was President of the SC Section of the American Society of Civil Engineers from 1977-1978. George was always civic-minded. He was: - A founding member of and a leader in the North Augusta Rotary Club, Past President of the North Augusta Rotary Club and was directly responsible for the award of over $100,000 of College Scholarships to North Augusta and Fox Creek High Schools, - Past President of the North Augusta Chamber of Commerce (1989), - Founder of the annual Bridge Building competition at North Augusta High School (1970 to 2009), - A former Leader with the CSRA Girl Scout Council where he designed the Camp and other facilities with the Girl Scouts, - The designer of the bridge structures at North Augusta’s Living History Park, - A Life Member of the Masonic Lodge (60+ years), and - An active member of Resurrection Lutheran Church in Augusta, GA. George received numerous accolades based on his contributions including: - the “Letellier Cup” for lifetime contributions from the American Society of Civil Engineers, SC Section (2014), - the North Augusta Chamber of Commerce “Man of the Year” award (2014), - five “Rotarian of the Year” awards, and - numerous “Who’s Who in Engineering”, “Who’s Who in the South and Southwest”, and “Personalities of the South” awards. George was preceded in death by his wife Marcia, his father Gordon Nelson, his mother Myrtle Agle Nelson, and his brothers Gordon (“Hap”) Nelson Jr. and Robert Nelson. George leaves behind a daughter Jennifer Bailey (Duane), a son Eugene Nelson (Deena), and four grandchildren: Chris Carman, Danielle Nelson, Michael Nelson, and Scott Nelson. Pallbearers will be Mr. Nelson’s grandchildren. Memorials may be made to Rotary Club of North Augusta Scholarship Fund, PO Box 6712, North Augusta, SC 29861.

The family of George Agle Nelson created this Life Tributes page to make it easy to share your memories.

Send flowers to the Nelson family.