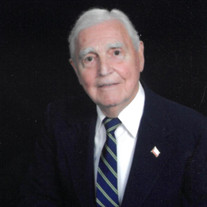 North Augusta, SC—The Mass of Christian Burial for Mr. George J. Odell, 90, who entered into rest January 3, 2021 will be conducted Wednesday afternoon at 3 o’clock in Our Lady of Peace Catholic Church, Father Richard Wilson Celebrant. Interment will follow at a later time in Chattanooga National Cemetery with Veterans Honors. The service will be streamed live on the Posey Funeral Directors Facebook Page. For those attending the service, masks are required and social distancing will be practiced. Mr. Odell was born in New Haven, Connecticut, was a former resident of Chattanooga, Tennessee, having made North Augusta his home for the past 30 years. He was a former parishioner of St. Jude Catholic Church in Chattanooga and a current parishioner of Our Lady of Peach Catholic Church. At both churches he served in the choir, as a Eucharistic Minister and as a Lector. Mr. Odell was a US Navy Veteran and member of Jesse C. Lynch Memorial American Legion Post #71. He earned his B.S. from Boston University and M.B.A. in management from Suffolk University. Mr. Odell retired from Tennessee Valley Authority as a staff supervisor of management services nuclear power and later was employed by Westinghouse at the Savannah River Site as an engineer. He was preceded in death by his parents, George and Mary Jane Odell, a brother, Joseph M. Odell and a grandson, Scott Michael Odell. Mr. Odell was an avid long distance runner and a member of the Chattanooga Track Club, enjoying traveling, spending time with his family, home brewing as well as making root beer for his grandchildren. Mr. Odell met his bride, Marthe J. Beauregard, at a USO dance at Naval Air Station Quonset, Rhode Island while serving as an Aviation Electronics Technician, Second Class, U. S. Navy from 1951 to 1955. In lieu of flowers, the family requests donations be made to the United Service Organizations, www.uso.org. Survivors include his wife of 66 years, Marthe J. Odell; three daughters, Martha Mary Burnip, North Augusta, SC, Charlotte (Mark) Estabrook, Signal MT, TN and Katryn Mason, Chattanooga, TN; two sons, Dr. George J. (Suzanne) Odell, Arnold, MD and John Christopher (Cheryl) Odell, Gig Harbor, WA; 11 grandchildren; seven great-grandchildren; a sister-in-law, LusiaPeschiera-Odell. The family would like to express their gratitude to Dr. Ray Johnson, Dr. John Velky and his incredible staff, and Kathy from Home Instead. In the words of his beloved mother-in-law, "George, you're 'A-Number One!'" Posey Funeral Directors of North Augusta is in charge of arrangements (803.278.1181). Visit the registry at www.POSEYCARES.com

The family of George J. Odell created this Life Tributes page to make it easy to share your memories.

Send flowers to the Odell family.