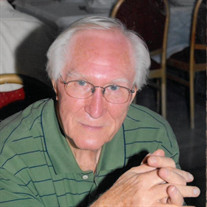 North Augusta, SC—Graveside Services for Mr. George Thomas “Tom” Piper, 87, beloved daddy and granddaddy, who entered into Heaven on July 20, 2020, will be conducted Wednesday morning at 11 o’clock in Pineview Memorial Gardens. Rev. Tom Lowry officiating. Tom was born in 1932 in the small town of Petersburg, PA. He lived an idyllic small-town childhood and loved to tell his family about the adventures he had growing up. He served in the U. S. Navy and created quite a stir when he joined the U. S. Marines without having been discharged from the Navy first. It was while he was in the Marines, stationed in Albany, Georgia, that he met Louise Barfield. They were married in 1955, and Tom attended Mercer University, where he played baseball before being injured. After graduation in 1959 with a degree in English, Tom wanted to join the FBI. He completed all training, but before he took his physical, his mother and wife talked him out of it. He spent the next 40 years working for GAB Robins, as an independent claims adjuster. He was Branch Manager in Augusta, GA for many years. Tom was active in The Lions Club and The Augusta Claims Association, which he was president of in 1974. Tom, Louise, and their three children moved to North Augusta in 1971. Tom served as a deacon and Sunday School teacher for many years at Curtis Baptist Church. Over the years, he served in many other leadership capacities. He loved to travel and served God at home and abroad on many mission trips. When Tom retired, he became the full-time babysitter of his twin grandchildren, Eleanor and Geoffrey, from the time they were six weeks old to the start of 4K. Tom was preceded in death by his wife of 64 years, Louise B. Piper. Tom never met a stranger and truly loved meeting people and trying new things. He had a very dry sense of humor and loved to joke. Tom is survived by his children, Patti Powell, Daniel Piper and LuAnn Davis, all of North Augusta, SC; two sisters, Mona Graham of Boiling Springs, PA and Jennifer Tennis of Huntingdon, PA; eight grandchildren and eight great-grandchildren. Memorials may be made to Hospice Care of South Carolina at www.hospicecare.net or the Southern Baptist International Mission Board at www.IMB.org. Posey Funeral Directors of North Augusta is in charge of arrangements (803-278-1181). Visit the registry at www.PoseyCares.com

The family of George Thomas "Tom" Piper created this Life Tributes page to make it easy to share your memories.

Send flowers to the Piper family.