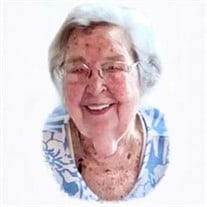 North Augusta, SC – Graveside Services for Mrs. Georgia M. Morris, 93, who entered into rest in her home, February 7, 2022, will be conducted Friday afternoon at 2 o’clock in Pineview Memorial Gardens. The family will receive friends at the graveside following the service. Mrs. Morris was born July 21, 1928 to the late Edward Warren and Alice Towns McKie McElmurray. She was raised by her parents in North Augusta during the Great Depression and was among those of the “Greatest Generation.” During her humble upbringing, she was taught to have a strong work ethic, helping in her family’s bakery, and assisted her family in operating their home as a boarding house for the new DuPont employees moving to the area to work at the Savannah River Site. Mrs. Morris attended Lander College and later married her first husband, James Otis Barrow, Jr. They were married in Fairview Presbyterian Church, where she was a founding member. Mrs. Morris supported her family as a homemaker and often invited countless others to join her family in her home for dinners. Following the death of Mr. Barrow, she continued to care for her family and serve her community in many ways. She meticulously cared for her yard, creating her own little paradise and had a passion for gardening. Mrs. Morris was a member of the Carolina Hills Garden Club and later started a junior garden club for young girls, where she was able to teach them how to plant, cultivate, harvest and store the fruits of gardening. She was also known for the joy she found in dancing. Mrs. Morris would go on to meet her second husband, Eugene Clifford Morris, at a social dance event. She cared for Mr. Morris through his illnesses prior to his death. Mrs. Morris adored her family and constantly gave of herself. She will be fondly remembered as a strong, caring woman who had a servant’s heart. In addition to her first and second husbands, she was preceded in death by a son, James “Jim” Otis Barrow, III and a daughter, Connie Gast. Survivors include a daughter, Mary Alice Woodrum; a brother, Buddy McElmurray; eight grandchildren, Elise Kirk, Tucker Mathis, Lauren Muns, Ginny Gast, Grant Gast, Otis Barrow, Josh Barrow and Sawyer Barrow; and fifteen great-grandchildren. In lieu of flowers, memorials may be made to Fairview Presbyterian Church, 1101 Carolina Avenue, North Augusta, SC 29841 or Kindred Hospice, 5250 Woodside Executive Court, Aiken, SC 29803. Posey Funeral Directors of North Augusta is in charge of arrangements (803)278-1181. The service will be streamed live to the Posey Funeral Directors Facebook page. Visit the registry at www.POSEYCARES.com.

The family of Georgia M. Morris created this Life Tributes page to make it easy to share your memories.

Send flowers to the Morris family.