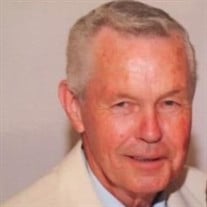 Jackson, SC—Hyman Talmadge Creamer, 91, of Jackson, South Carolina, beloved husband of Joyce Creamer, passed into the Arms of JESUS on May 23, 2020. Born April 8, 1929, and raised in Wetumpka, Alabama, Hyman Creamer was a devout Christian and a true Southern gentleman. Private Graveside Services will be held in Jackson Memorial Park with Veterans Honors. A “Celebration of Life” will be scheduled for a later date. Mr. Creamer served his country with honor in the United States Army and was wounded in combat during the Korean Conflict. He was transferred to Fort Gordon in Augusta, Georgia, to be treated for his wounds. Following his medical discharge from the Army, Hyman moved to Jackson, SC, to work at the Savannah River Plant. In Jackson he met Joyce, the love of his life. Together they built a happy home and raised two sons. Mr. Creamer also ran his own business, “Creamer Heating and Air,” for thirty-five years. Hyman and Joyce celebrated their fiftieth wedding anniversary in 2008 and would have celebrated their 62nd anniversary on June 14, 2020. After retirement, Mr. Creamer began farming; he loved selling his vegetables and visiting customers. In 2019, family and friends gathered to celebrate his ninetieth birthday. Mr. Creamer was a member of the American Legion Post 97 and was honored in recent years as the Grand Marshall of the Jackson Christmas Parade. Mr. Creamer was devoted to GOD, his country, his family, and his community. He was an exceptionally kind and giving man. A musician and avid lover of traditional Country and Southern Gospel music, Hyman played pedal steel guitar. While a teenager and playing with his band in Montgomery, Alabama, Hyman was once asked by a young Hank Williams to play steel guitar in Mr. Williams’ band, but due to his father’s advice, Hyman declined the offer. In 1956, Hyman saw Elvis in concert at the Bell Auditorium. In the 1970’s, Hyman was a member of a group of local musicians called the “Rocky Tops.” Mr. Creamer also played in a group called “The Jackson Five” with friends from church. He thoroughly enjoyed attending Gospel concerts. Hyman Creamer was a life-long Christian. While living in Jackson, he was a member of Bethel United Methodist Church, where he sang in the choir, and a member of Matlock Baptist Church, where he belonged to the “Webb Site” Sunday School Class. Mr. Creamer had an intense devotion to Christian service. Hyman was predeceased by his parents, Charlie and Gussie Lou Creamer, and by his brother Morris Creamer, all of Wetumpka, Alabama. He is survived by his devoted wife Joyce Eubanks Creamer; two sons, Charles “Chip” Creamer (Carol) and Kevin Creamer (Anita); two beloved grandchildren, William Corey Creamer and Penelope Rose Creamer; his loving sisters, Bessie Stephens, Annie Lee Dubose, and Joanne Jernigan, and his younger brother Bobby Creamer (Connie); many loving nieces and nephews; and numerous treasured friends and neighbors. Mr. Creamer also leaves behind his beloved dog Precious, who was his faithful companion during many rides to the garden. The family would like to thank Kindred Hospice for their dedication and compassion. We can never repay the kindness and generosity of friends and relatives. In lieu of flowers, donations may be made to The American Legion Post 97 or to the Matlock Baptist Church Mission Fund. Posey Funeral Directors of North Augusta in charge of arrangements (803.278.1181). Visit the registry at www.POSEYCARES.com

The family of Hyman Talmadge Creamer created this Life Tributes page to make it easy to share your memories.

Send flowers to the Creamer family.