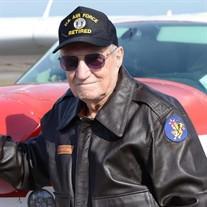 North Augusta, SC - Memorial Services for James W. Bennie, CMSgt., USAF, Ret., 98, who entered into rest March 13, 2020 at his residence in Modoc, SC surrounded by the love of his family and caregivers, will be conducted Thursday afternoon at 4 o’clock from the Posey Funeral Chapel. The Very Rev. C. Alexander McDonald officiating. Interment will take place in Arlington National Cemetery, Arlington, VA., with full Military Honors at a later date. Born in Polmont, Scotland in 1922, Jim came to America with his family at the young age of 8 years. They settled in Boston, MA. Jim joined the Army-Air Corp in 1941 to serve in WWII. In 1943, U.S. and China joined forces to form the 5th Fighter Group in the Chinese Air Force, which became part of the 14th Air Force Group – known as the Flying Tigers. Jim was assigned to that unit, working on P40/P-51 Fighters. In 1946, following the War, Jim returned to the US and began a career with Eastern Airlines. In 1951, he was recalled to serve in the US Air Force and was stationed in Japan. He was deployed to Korea from 1951 – 1955 working on the C-119 Cargo planes. Following Korea, Jim went on to serve with French Forces Indo-China and the Battle of Dien Bien Phu. He then went on to serve in the Cold War with the F-100/4FC Fighters. Jim served a tour in Vietnam from 1965 to 1966 with the F-4C/F105 Fighter jets. Following Vietnam, Jim returned to the US and served many tours, stationed at many different bases across this country. His last two assignments landed him in (1) Systems Command in Washington D.C., and (2) Headquarters Pacific Air Force at Hickam AF Base in Hawaii. In 1997, when Jim ended his tour in Hawaii, he retired from the U.S. Air Force having served his country faithfully and honorably. Jim is predeceased by his parents, Peter and Mary Mathers Bennie; his beloved wife, Elsie Louise Gillon Bennie and a granddaughter, Beth Burgess. Survivors include: two daughters, Molly Rehkemper, Chesapeake Beach, MD; Ann Brentfield-West, Key Point, WA; a son, Joseph Bennie, Mililani, HI; a sister, Ann Chumley, Laudon, TN; five grandchildren, seven great-grandchildren; one great-greatgrandchild; two nieces; two great-nieces; a great-nephew; several cousins who remain in Scotland; and his longtime caregivers, Glynnis Doolittle and Vickie Lehr. In lieu of flowers, memorials may be made to Good Shepherd Church, P.O. Box 1468, McCormick, SC 29835.

North Augusta, SC - Memorial Services for James W. Bennie, CMSgt., USAF, Ret., 98, who entered into rest March 13, 2020 at his residence in Modoc, SC surrounded by the love of his family and caregivers, will be conducted Thursday afternoon at... View Obituary & Service Information

The family of James W. Bennie, CMSgt., USAF, Ret. created this Life Tributes page to make it easy to share your memories.