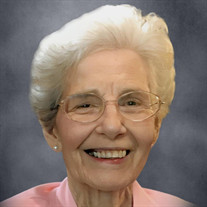 North Augusta, SC – Funeral Services for Mrs. Jean Carswell, 93, who went to be with her Lord and Savior April 16, 2022, will be conducted Tuesday morning at 11 o’clock from the Posey Funeral Chapel, Dr. Paul W. Noe officiating. The service will be streamed live at http://www.poseyfuneraldirectors.com/obituaries/permalink/10451153/LTWebcast Interment will follow in Pineview Memorial Gardens. The family will receive friends at the funeral home one hour prior to the service. Laurie Jean Trahan Carswell was born May 31, 1928, to the late C.F. and Annie Laurie Hightower. Jean came to know the Lord on 1936 through the ministry of Dr. E.C. Sheridan at Curtis Baptist Church. After she graduated from North Augusta High School in 1945, she entered Tift College and received her BA degree in 1949. Having felt a call to mission work she attended New Orleans Baptist Seminary, where she earned her master’s degree in Religious Education in 1951. While attending seminary, Rev. Aaron Trahan came into her life, and they were married in 1951. After his untimely death in 1955, Jean returned to the North Augusta area and began her teaching profession in Richmond County in 1956. She taught in Rollins Elementary, and later Butler High School where she taught French and later became a guidance counselor. Jean continued her education pursuit and earned her master’s degree in Secondary Education at the University of Georgia in 1970. After 21 years in Richmond County, she returned to Aiken County as a guidance counselor for one year. Later she joined the Curtis Baptist High School as their guidance counselor. She retired in 1995. During that timeframe she married Thomas J. Carswell in 1976 until his death in 2004. She is survived by her sons, CR “Randy” Trahan (Jan), Aaron Lynn Trahan (Nancy); daughter, Laurie Kinsey (Ben); sisters, Dorothy Kanagy, Nell Biggerstaff and Barbara Hightower; eight grandchildren, 23 great-grandchildren and two great-great-grandchildren. Pallbearers will be Joshua Trahan, Matthew Trahan, Daniel Trahan, Rob Miles, Jordan Trahan and Gunner Trahan. Memorials may be made to the Annie Armstrong Mission Offering at www.anniearmstrong.com or North American Mission Board, P.O. Box 116543, Atlanta, GA 30368-6543 (AAEO in memo line).

North Augusta, SC &#8211; Funeral Services for Mrs. Jean Carswell, 93, who went to be with her Lord and Savior April 16, 2022, will be conducted Tuesday morning at 11 o&#8217;clock from the Posey Funeral Chapel, Dr. Paul W. Noe officiating.... View Obituary & Service Information

The family of Mrs. Jean Carswell created this Life Tributes page to make it easy to share your memories.

Send flowers to the Carswell family.