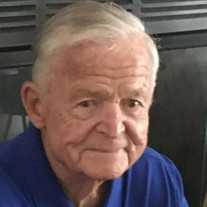 North Augusta, SC- Funeral Services for Mr. Joseph Arthur Stutts, 92, who entered into rest April 14, 2021, will be conducted Monday morning at 11 o’clock at Friendship Baptist Church with Rev. Heyward Horton officiating. Interment with Veterans Honors will follow in Sunset Memory Gardens. For those unable to attend, the service will be streamed live on the Posey Funeral Directors Facebook page. Those in attendance are encouraged to wear a mask and social distancing will be practiced. Mr. Stutts was a native of Pinetta, FL moving to Winston Salem, NC as a child after the passing of his mother and became a member of the Methodist Children’s Home in Winston Salem. He has made Aiken County, SC his home for the past 67 years. After graduating from Reynolds High School, he attended High Point College and the University of Georgia. Joe served his country in the United States Air Force for 27 months in Japan during the Korean War prior to starting work at the Savannah River Plant in 1953. He retired in 1987 as an E&I Foreman. Mr. Stutts was preceded in death by his parents, Martin and Rilla Stutts; wife, Jesse Earline Stutts. After a long courtship he married Ms. Linda Pitts in 1999, she preceded him in death in September 2020. Survivors include seven children, Ronnie J. Stutts, James A. (Terry) Stutts, Gary L. (Marsha) Stutts, Tommy A. Stutts, Debbie (Charlie) Bell, Robbie (Ray) Bellamy and Amie (Baylan) Thomas; 11 grandchildren; many great-grandchildren; sisters, Margie Stutts and Anna Morrison; brother, Cabb T. Stutts. The family will receive friends at the funeral home Sunday afternoon from 3 until 5 o’clock. Those in attendance are encouraged to wear a mask and social distancing will be practiced. Pallbearers will be Jason Stutts, Robert Stutts, Phillip Stutts, Brady Thomas, Carter Thomas, Jordan Rawls, Logan Doying, Chase Doying and Steven Purvis. Memorials may be made to Friendship Baptist Church, 124 Clearmont Drive, Belvedere, SC 29841.

The family of Joseph Arthur Stutts created this Life Tributes page to make it easy to share your memories.

Send flowers to the Stutts family.