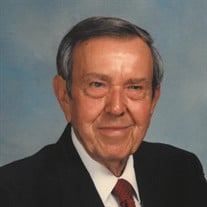 North Augusta, SC – Graveside Services for Mr. Leslie C. “Les” Gotschall, 97, who entered into rest August 21, 2021, will be conducted Wednesday afternoon at 2:30 p.m. in Pineview Memorial Gardens with Veteran Honors. Rev. Tommy Wilkes and Dr. T. Joseph Lusk officiating. The family will receive friends at the graveside following the service. The service will be streamed live on the Posey Funeral Directors Facebook page. Those in attendance are encouraged to wear a mask and social distancing will be practiced. Mr. Gotschall was born June 19, 1924 in Three Rivers, MI to the late Russell and Mary Routh Gotschall. Les was a U.S. Army veteran and while in service, married his late wife, Lena W. Gotschall. He later made North Augusta his home for over 70 years. Mr. Gotschall retired from Pontiac Master Auto Service as an Accredited Transportation Counselor with 31 years of service. Les was active in the community throughout his life. He was the past president of the Augusta Lions Club, a life member of the Jessie C. Lynch Memorial American Legion Post# 71 and a life member of the Disabled American Veterans, Pendleton King Chapter. Mr. Gotschall enjoyed the game of golf and was a long-time member of Grace United Methodist Church. In addition to his wife and parents, he is preceded in death by two brothers and two sisters. Survivors include two daughters, Leslie Jean (John) Altoonian and Deborah Tankersley and her late husband John L. Tankersley, all of North Augusta, SC; three grandchildren, Leslie Allision (Brian) Bolduc of Charleston, SC, Shannon (Derrick) Minor of Raleigh, NC and Kim (Charles) Koss or North Augusta, SC; four great-grandchildren; and numerous nieces and nephews. Honorary pallbearers will be Doug Hastings, Frank McKnight and the members of the Jessie C. Lynch Memorial American Legion Post# 71. The family of Mr. Gotschall would like to express their deep appreciation to the staff of Brookdale Senior Living and Kindred Hospice for their compassionate care. In lieu of flowers, memorials may be made to Grace United Methodist Church, 639 Georgia Avenue, North Augusta, SC 29841 or the National Kidney Foundation, www.kidney.org Posey Funeral Director of North Augusta is in charge of arrangements (803)278-1181.

The family of Leslie C. "Les" Gotschall created this Life Tributes page to make it easy to share your memories.

Send flowers to the Gotschall family.