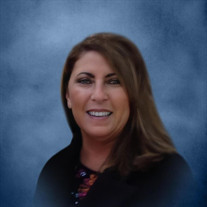 Sevierville, TN - Memorial Services for Lisa Beatty Posey, 55, who departed this world and entered into rest on September 5, 2021, will be held Friday evening at 6 o’clock in the Posey Funeral Chapel, Dr. Mark Riser officiating. She is survived by her husband Bill and daughter Taylor of Sevierville, TN, (stepmother), Jackie Beatty, Cleburne, TX, an aunt Nancy Curtis, Midwest City, OK, a brother John Beatty, Denver, CO, and a niece Libbie Beatty Williams, Cleburne TX. Lisa was preceded in death by her father Paul Beatty, mother Velda Beatty, brother Robert Paul Beatty, step sister Brandi Farrel, maternal grandmother Edith Ward, and paternal grandparents Robert and Elizabeth Beatty. Lisa was born June 8,1966 in Cleburne, TX. As a young person, her interests stemmed into the love of horses where she competed and trained horses with her aunt, Nancy. After graduating high school in 1983, she went on to earn a degree in Cosmetology. Later in life, she entered into Project Controls Technical work on several construction sites across America. On one particular job in Ohio, she met Bill Posey, and after a few years of being together, the two were married on August 8, 2003 in Las Vegas, Nevada. Three years later, they had their daughter, Taylor. The Poseys later moved their permanent residence to Tennessee. Lisa Posey was a loving and kind person. Her main priority in life was always her family, as she always thought of them first and always put herself last. She was always ready for the challenges in life, was continually up for a good time, and consistently gave sound advice where it was needed. She was a smart, practical, and simple person, yet with a complex and vibrant soul. She will always be loved and remembered, and the world will miss her dearly.

Sevierville, TN - Memorial Services for Lisa Beatty Posey, 55, who departed this world and entered into rest on September 5, 2021, will be held Friday evening at 6 o&#8217;clock in the Posey Funeral Chapel, Dr. Mark Riser officiating. She is... View Obituary & Service Information

The family of Lisa Ann Posey created this Life Tributes page to make it easy to share your memories.

Send flowers to the Posey family.