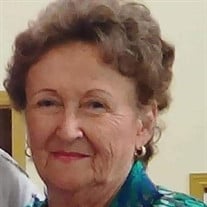 Jackson, SC—JoAnn Barfield Stripling, transitioned peacefully to her heavenly home on May 2, 2020. A private family graveside service will be held on Tuesday in Pineview Memorial Park with Dr. Mark Riser officiating. JoAnn was born to the late Joe Brown Barfield and Edna Roberts Barfield in Irwin County, Georgia and grew up in Ocilla, Georgia. She met the love of her life and they moved to Virginia and then finally settled in Jackson, South Carolina where she and Loron raised their sons and made many wonderful, lifelong friends. She was a member of Jackson First Baptist Church where she served as a nursery worker and was a member of the Dorcas Sunday School class. JoAnn loved spending time with family, taking care of her animals, growing flowers, and traveling. She left a lasting impression on all who met her – she was warm, compassionate and kind. Corinthians 13:5 teaches that love does not dishonor others, it is not self-seeking, it is not easily angered and keeps no record of wrongs. Her life embodies these teachings. We will keep her in our hearts forever. Survivors include her husband of 67 Years, Loron Stripling; two children, Michael (Libby) Stripling of North Augusta, and Craig (Kimberly) Stripling of North Augusta; six grandchildren, Amy (Ted) Frey of Sumter, Richard (Tina) Stripling of Edgefield, Melissa (Logan) McKenzie of Rockingham, North Carolina, Zane (Anna) Stripling of North Augusta, Zachary (Kile) Burch of Statesboro and Jessi (Brian) Davis of Gilbert, SC; nine great-grandchildren, Christian, David, Cheyenne, Logan, Jakob, Kinsey, Kaylee, Evie and Wade; a brother, Larry (Voncil) Barfield of Ocilla, Georgia; a host of nieces and nephews and her precious Yorkie, Jack. Memorials may be made to Sumter Strays Animal Rescue 1070 Foxridge Court, Sumter, SC 29150 or Jackson First Baptist Church, 400 3rd Street, Jackson, SC 29831. Posey Funeral Directors of North Augusta in charge of arrangements (803.278.1181). Visit the registry at www.POSEYCARES.com

The family of Lucy JoAnn Stripling created this Life Tributes page to make it easy to share your memories.

Send flowers to the Stripling family.