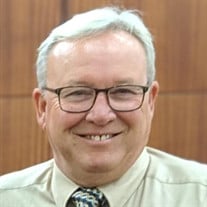 Evans, GA - Memorial Services for Mr. Michael L. Emmette, 64, who entered into rest February 19, 2022, will be conducted Thursday afternoon at 2 o’clock in the Posey Funeral Chapel. Chaplain Dexter Lambert officiating. The family will receive friends at the funeral home one hour prior to the service. Interment Services will be held at a later date in St. Teresa of Avila Catholic Church Columbarium. Mr. Emmette was born February 22, 1957, to Cholena Campbell Emmette and the late Harry T. Emmette. He was a native of Beech Island, SC, having made Evans, GA his home for the past 25 years. Mr. Emmette faithfully attended St. Teresa of Avila Catholic Church with his best friend and wife of 25 years, Connie Emmette. He was a longtime employee with DSM Chemical and retired with 39 years of service. Mr. Emmette was a sports enthusiast, loved the game of golf and was an avid Carolina Gamecocks fan. However, his greatest joy in life was his family. He will be fondly remembered for his contagious laugh and fun-loving personality. In addition to his father, he was preceded in death by his brother, David Emmette; a daughter, Kathryn Baker; and a niece, Jessica Murphy. Survivors include his beloved wife, Connie Emmette; his mother, Cholena Campbell Emmette; two sons, Dannon (Stephanie) Baker, and Caleb Michael Emmette; a daughter, Olivia Emmette; two sisters, Lynn Twitty and Laurie Smith; two grandchildren, Charlie Baker and Sammie Baker; and a number of nieces and nephews. In lieu of flowers, memorials may be made to the Tunnel to Towers Foundation, www.t2t.org or to a charity of your choice. Posey Funeral Directors of North Augusta is in charge of arrangements (803)278-1181. To sign the registry or to view the livestream of the services, visit www.POSEYCARES.com

The family of Michael L. Emmette created this Life Tributes page to make it easy to share your memories.

Send flowers to the Emmette family.