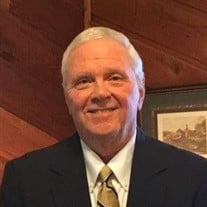 COLUMBIA, SC – Private Graveside Services for Mr. Michael Lee Gibson, 71, who entered into rest January 20, 2021, will be conducted in the Butler Cemetery. Mr. Gibson was a native of Ironton, OH, and a former resident of North Augusta, having made Columbia his home for the past 51 years. A graduate of the University of South Carolina with a bachelor’s degree in Advertising and Public Relations and a minor in Business Administration, he was named to Outstanding Young Men in America in 1976. Mr. Gibson began his career as a Public Relations assistant at First National Bank of South Carolina. He later served as Marketing Director with the Greater Columbia Chamber of Commerce; Assistant Executive Director with the Economic Development commission of Greater Columbia; Commercial and Industrial Development Director of the Greater Columbia Chamber of Commerce; and as the Marketing Director for Toma, Inc, where he worked with industrial and commercial real estate sales and leasing. Most recently, he worked as a real estate agent with Heritage Realty. Mr. Gibson served in various roles within the community including as a Team Captain with the United Way and as the former secretary and treasurer of the Greater Columbia Innkeepers Association. He was a member of Riverland Hills Baptist Church as well as various civic and professional organizations including the YMCA, South Carolina Economic Developers’ Association, South Carolina Association of Realtors, and the Greater Columbia Association of Realtors. Mr. Gibson will be remembered as a loyal man who was a great friend to many. Mr. Gibson was preceded in death by his parents, the late Carl and Mary Kay Gibson, and his son, the late Brian M. Gibson. Survivors include his wife of 51 years, Martha Kearns Gibson; daughter, Angela G. (Timothy) Tice, Mt. Pleasant, SC; former daughter-in-law, Haley Gibson (Matt) Norris, Blackville, SC; four grandchildren, Sommer Gibson, Brian Gibson, Gibson Tice, and Graham Tice; and sister, Carla G. Margalit, Portland, OR. The family would like to offer special thanks to the Lexington Medical Center staff for their kindness and devoted care. Memorials may be made to the Lexington Medical Center at www.lexmed.com/giving/donate. Posey Funeral Directors of North Augusta is in charge of arrangements (803.278.1181). Please visit the registry at www.PoseyCares.com

COLUMBIA, SC &#8211; Private Graveside Services for Mr. Michael Lee Gibson, 71, who entered into rest January 20, 2021, will be conducted in the Butler Cemetery. Mr. Gibson was a native of Ironton, OH, and a former resident of North Augusta,... View Obituary & Service Information

The family of Michael Lee Gibson created this Life Tributes page to make it easy to share your memories.

Send flowers to the Gibson family.