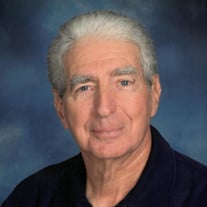 North Augusta, SC—Mr. Richard H. Goley, Sr., 83, entered into rest January 1, 2022, at his home following an extended illness. Graveside Services will be held Tuesday morning at 11 o’clock at Pineview Memorial Gardens with Rev. Steve Davis, Rev. Gene Jennings and Rev. Roy Kiser officiating. The family will receive friends following the service. We encourage those attending to wear a mask and social distancing will be practiced. For those who are unable to attend, the service will be streamed live on Posey Funeral Directors Facebook page. Richard was born on May 4, 1938, and was a lifelong resident of South Carolina. He was the son of the late Howard Goley and Mae Stanton Goley. Richard proudly served his country in the United States Army. He was a retiree from International Paper (Federal Paperboard/ Continental Can) where he worked for 35 years as a maintenance mechanic and was fondly known as “brother” by his coworkers. An active man, Richard’s earlier years involved activities like water skiing, scuba diving and motorcycle riding. His neighbors knew him as the neighborhood greeter on the four-wheeler. Richard loved all things involving the use of a tractor, a backhoe, a dump truck, or a chain saw. He loved quiet time with endless rides and walks in the woods. He loved camping with friends, boating, and spending time at his beloved lake house. Richard was known for his friendly and talkative nature, as he never met a stranger or forgot a familiar face and name. He was a lifelong member of First Baptist Church of North Augusta and the A.L. Baxley Sunday School class. A 50-year member of the Acacia Masonic Lodge of North Augusta, Richard could always be counted on to nurture his friendships. He did not hesitate to call someone to catch up, share advice or prayer with someone in need, or give words of encouragement. He lived by showing others how to love. He was a man who loved the Lord, his family, friends, and life. The family would like to extend gratitude to Dr. John and Mrs. Dee Velky, the staff of Family Physicians of North Augusta, and Regency Hospice for their loving care. Pallbearers will be Rusty Flanders, Robert Guess, David Eubanks and Bill Manly. Honorary Pallbearers will be members of the Acacia Masonic Lodge #315 AFM. Survivors include his wife and best friend of 62 years, Doris Wells Goley, his daughter, Dianne (John) Goley Hammond, and his son Rick (Julie) Goley. He loved his role as Papa to his grandchildren, Lauren Hammond (Adam) Dimmick, Chris Hammond, Scott Hammond, and Thomas Goley. Richard was a hands-on and loving great grandfather to Deke Dimmick. As an only child, he considered his many cousins as siblings and they brought great joy to him. In lieu of flowers, the family requests that a “Random Act of Kindness” be made in remembrance of Richard Goley. Posey Funeral Directors of North Augusta is in charge of arrangements (803-278-1181). Visit the registry at www.PoseyCares.com

The family of Richard H. Goley Sr. created this Life Tributes page to make it easy to share your memories.

Send flowers to the Goley family.