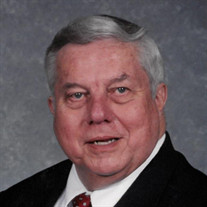 North Augusta, SC—Funeral Services for Mr. Robert “Bob” West, 83, who entered into rest at his home May 28, 2021, will be conducted Tuesday morning at 11 o’clock in First Baptist Church of North Augusta with Rev. Roy Kiser and Dr. Robert West officiating. Interment will be in Pineview Memorial Gardens. The family will receive friends at the church one hour prior to the service. Mr. West was a native of Asheville, NC, having made North Augusta, SC his home for the past 50 years. He was a member of First Baptist Church of North Augusta where he served as Sixth Grade Sunday School Director for many years, Deacon, Benevolence Committee member, and drove the bus for several Senior High Choir tours. He was a former member of the Civitan Club and was a retired Textile Chemist from Air Products. Mr. West enjoyed working in his yard, traveling and watching sports. Most of all, he enjoyed spending time with his family. He was preceded in death by his parents, Robert Lee West and Mabel Snelson Carter. Survivors include his wife of 58 years, Edith S. West, his daughter and son-in-law, Teri and Hoke Huss, Greenwood, SC; his son and daughter-in-law, Dr. Robert and Tammy West, Martinez, GA; four grandchildren, Brenna (Brody) Johnstone, Chris (Delaney) Huss, Caroline West and Matthew Huss. The family would like to express special appreciation to Christie Hillary for her years of service as a caregiver. Pallbearers will be Don Bridges, Charles Eubank, Phillip Lamar, Chris Huss, Matthew Huss and Hoke Huss. Memorials may be made to First Baptist Church of North Augusta, 625 Georgia Avenue, North Augusta, SC 29841.

The family of Robert "Bob" West created this Life Tributes page to make it easy to share your memories.

Send flowers to the West family.