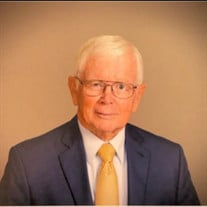 Matthews, NC—Mr. Thomas W. “Tom” Greene, Sr, 88, entered into rest January 3, 2022. PLEASE NOTE a change in the previously announced funeral services due to Covid-19 illness in the Greene family: Graveside Services only will be conducted Friday morning at 11 o’clock in Pineview Memorial Gardens with Veteran’s Honors. Dr. Don Brock officiating. There will not be a public visitation, however, friends are welcome to come by the funeral home and sign the register book until 6 o’clock this Thursday evening. For those who are unable to attend, the graveside service will be streamed live on Posey Funeral Directors Facebook page. Mr. Greene was a native of Atlanta, Georgia, a former resident of North Augusta for over 50 years, having made his residence in Matthews, North Carolina. He was a graduate of Georgia Tech, served in the US Air Force and retired from Savannah River Site as the Superintendent of Procurement and General Services. Mr. Greene was a member of the First Baptist Church of North Augusta where he taught Sunday School for many years. He served on the City Council of North Augusta for 14 years and as Mayor of North Augusta for 12 years. Mr. Greene was the former Chairman of North Augusta 2000 and was named North Augusta Citizen of the Year in 1998. Because of his vision, the North Augusta Greeneway was named after him. Mr. Greene was predeceased by his wife of 49 years, Barbara S. Greene. Survivors include his son, Thomas (Patricia) W. Greene, Jr., Hartsville, SC; two daughters, Lynne Holcomb (Rick) and Susan Askey (Charlie), both of Charlotte, North Carolina; two sisters, Betty Jean Anderson and Joanne Keri; a brother-in-law, Buddy Hawkins; eight grandchildren, Thomas Judson Greene, Rebecca Frances Greene, Chandler William Greene, Andy Thomas Holcomb, Katie (Todd) Culbreth, Allison Askey, Alex (Sandra) Askey and Adam Askey; four great-grandchildren, Savannah Boatwright, Luke Boatwright, Aiden Askey and Caleb Askey. Memorials may be made to Friends of the Greeneway, PO Box 6067, North Augusta, SC 29861. Posey Funeral Directors of North Augusta in charge of arrangements, (803-278-1181). Visit the website at www.poseycares.com

The family of Thomas Wendell Greene Sr. created this Life Tributes page to make it easy to share your memories.

Send flowers to the Greene family.