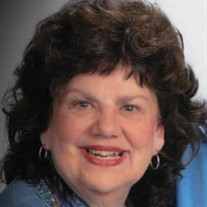 Thomasine Lois Hoge Vagle, age 84 formerly of Hockessin, Delaware, went home to be with the Lord Jesus Christ whom she dearly loved and served, on December 15, 2021 in Evans, Georgia. Thomasine was born in Lancaster, PA on March 1, 1937, to the late Thomas Louis Hoge and Gladys Numbers Hoge. After graduating from Wilmington High School in 1955, Thomasine attended Bob Jones University in Greenville, SC for two years and then transferred to Evangel College in Springfield, MO from which she graduated with a BA degree in Secondary Education in 1959. It was there that she met her future husband, Gary Merle Vagle, from Lake Bronson, Minnesota. They were married in the Washington Memorial Chapel in Valley Forge, PA in June of 1960. Gary passed away in 2013. After teaching English and French for a couple of years, Thomasine decided that she would rather be a school librarian than a teacher, so she took all the courses that were offered at the University of Delaware in Library Science. Then she worked as a librarian in Drew-Pyle Elementary School in Wilmington and was later hired as the first librarian of Thomas McKean High School. Thomasine retired in 2002 from Padua Academy in Wilmington, having served there as librarian for over 20 years. Thomasine loved sharing the gospel of Jesus Christ in prisons and wherever she had the opportunity. She had been a member of Prison Fellowship which was founded by the late Chuck Colson and also traveled widely as a member of Bill Glass’ Prison Ministry. She also prayed for the sick at the Healing Rooms in Avondale Presbyterian Church in Avondale, PA. Thomasine is survived by her daughter Kendra D. Metcalf and her husband Stephen of Evans, GA and her son Kirk D. Vagle and wife Heidi of Evans, GA. She is also survived by her sister, Patricia Frey of Newark, DE and six grandchildren, Rev. Kyle Vagle (Rendelle), Rev. Kody Vagle (Jaime), Zachary Metcalf (Kristen), Madison Metcalf, Colby Metcalf and Benjamin Metcalf and three great-grandchildren: Zephaniah Vagle, Uriah Vagle and Selah Vagle. No local services are planned for Mrs. Vagle at this time. Funeral services for Mrs. Vagle will be held Tuesday morning at 11 o’clock at Strano & Feeley Funeral Home, 635 Churchmans Road, Newark, DE 19702. Interment will follow in Gracelawn Memorial Park. The family will receive friends at the funeral home one hour prior to the service. In lieu of flowers, donations can be made to one of Thomasine’s favorite ministries, Prison Fellowship at prisonfellowship.org.

Thomasine Lois Hoge Vagle, age 84 formerly of Hockessin, Delaware, went home to be with the Lord Jesus Christ whom she dearly loved and served, on December 15, 2021 in Evans, Georgia. Thomasine was born in Lancaster, PA on March 1, 1937, to... View Obituary & Service Information

The family of Thomasine Lois Vagle created this Life Tributes page to make it easy to share your memories.

Send flowers to the Vagle family.