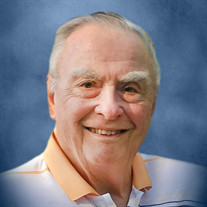 William R. “Bill” Jacobsen North Augusta, SC – Memorial Services for Mr. William R. “Bill” Jacobsen, 88, who entered into rest October 30, 2021, will be conducted Wednesday afternoon at 2 o’clock at Fairview Presbyterian Church. Interment will immediately follow in the church columbarium. Dr. Allen M. Thompson and Rev. Masaki Chiba officiating. Friends are invited to join the family for a reception in Bill’s honor in the church fellowship hall following the memorial services. Mr. Jacobsen was born in Syracuse, NY on April 27, 1933 to the late Lt. Col. and Mrs. Carl Henry Jacobsen. He graduated from Georgia Tech in 1955 after which he was commissioned as an ensign in the U.S. Navy and served on active duty for two years. Mr. Jacobson returned to Georgia Tech and received his MS in Chemistry in 1959. He worked as a chemist and later as a Lab Superintendent for E.I. DuPont and Westinghouse at the Savannah River Site, retiring with 34 years of service. Mr. Jacobsen’s retirement years were spent traveling and enjoying his grandchildren and great-grandchild. He was a member of Fairview Presbyterian Church, where he was actively involved and served as deacon, elder and a Sunday School teacher for many years. Mr. Jacobsen also held a life membership in the National Management Association, was a member of the Metropolitan Opera Guild, an emeritus member of the American Chemical Society and a past board member of the United Way of the CSRA. Survivors include his wife of 59 years, Kate V. Jacobsen; a daughter, Cindy (Andrew) Nelson of North Augusta, SC; a son, Carl Jacobsen of Marietta, GA; three grandchildren, Andrew (Mandy) Nelson III, Jacob William Nelson and Anna Kate Nelson; a great-grandson, Wyatt Nelson; and his beloved dog, Bitsy. Honorary Pallbearers will be the Faithful Followers Sunday School Class. In lieu of flowers memorials may be made to Fairview Presbyterian Church, 1101 Carolina Avenue, North Augusta, SC 29841. The family would like to express their gratitude to Dr. J. William Thurmond for many years of compassionate care and friendship. Posey Funeral Directors of North Augusta is in charge of arrangements (803)278-1181.

The family of William R. "Bill" Jacobsen created this Life Tributes page to make it easy to share your memories.

Send flowers to the Jacobsen family.