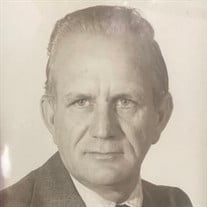 North Augusta, SC – Funeral Services for Mr. William Thomas Taylor, 94, who entered into rest April 30, 2022, will be conducted Wednesday afternoon at 2 o’clock in the Posey Funeral Chapel with Full Military Honors. Dr. T. Joseph Lusk officiating. The family will receive friends at the funeral home one hour prior to the service from 1 until 2 o’clock. Interment will be held at a later date in the Grace United Methodist Church Columbarium. Mr. Taylor was born on November 15, 1927, in North Augusta, SC, to the late William Thomas Taylor, Sr. and Mary McCarthy Taylor. He was a U.S. Navy veteran of World War II, retiring with 21 years of service to his country. Mr. Taylor was a member of Grace United Methodist Church and was an avid outdoorsman. He enjoyed planning trips and traveling with his family to New England and Newfoundland, Canada. Mr. Taylor had a great sense of humor and was known as a jokester. He was a devoted husband and father but his greatest joy in life was being “Poppy” to his beloved grandchildren. In addition to his parents, he was preceded in death by his wife, Frances Rowe Taylor; and two sisters, Mary Jo and Hazel. Survivors include his children, Judy Ann Higgins of Bellingham, MA, Stephen William Taylor (Jean) of North Augusta, SC, Diane F. Thompson (Robert) of Clarks Hill, SC, and Linda Sue Hannon (Kerry) of North Augusta, SC; a sister Dorothy Dugan of North Augusta, SC; nine grandchildren and eleven great-grandchildren. Honorary Pallbearers will be the grandchildren of Mr. Taylor. In lieu of flowers, memorials may be made to Grace United Methodist Church, 639 Georgia Avenue, North Augusta, SC 29841 or to St. Jude Children’s Research Hospital, www.stjude.org Posey Funeral Directors of North Augusta is in charge of arrangements (803)278-1181.

The family of William Thomas Taylor created this Life Tributes page to make it easy to share your memories.

Send flowers to the Taylor family.