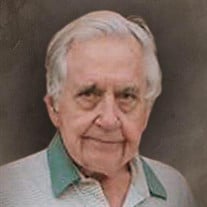 William “Billy” Wilkerson North Augusta, SC – Funeral Services for Mr. William “Billy” Wilkerson, 91, who entered into rest December 1, 2019, will be conducted Thursday afternoon at 2 o’clock from the Posey Funeral Chapel. Dr. Paul W. Noe officiating. Interment will follow in Westover Memorial Park, Augusta, GA, with Veterans Honors. Mr. Wilkerson was a lifelong resident of North Augusta and a U.S. Army veteran. He was a member of Woodlawn Baptist Church since his childhood, where he served as a deacon, taught the Wilkerson Sunday School Class and sang in the church choir. Most recently he became a member of Sweetwater Baptist Church. Mr. Wilkerson played several instruments and had a love for music. He enjoyed spending time with family and friends, gardening, traveling and remained active into his senior years riding his bike along the North Augusta Greeneway. Mr. Wilkerson adored his family, especially his great-grandson and his granddaughter, who was the apple of his eye. He was preceded in death by his wife, Mary Wilkerson and his daughter, Elaine Pearson. Survivors include a granddaughter, Jennie (Brandon) Redd, North Augusta; three great-grandchildren, Brantley Redd, Brianna Redd, Dylan Redd; numerous extended family and friends. Pallbearers will be Ryan Bugg, Scott Bowser, Daniel Martin, David Wilkerson, Tim George and Kevin Faires. The family will receive friends at the funeral home Wednesday evening from 6 until 8 o’clock. Memorials may be made to the National Kidney Foundation, www.kidney.org Posey Funeral Directors of North Augusta is in charge of arrangements (803-278-1181). Visit the registry at www.PoseyCares.com

The family of William "Billy" Wilkerson created this Life Tributes page to make it easy to share your memories.

Send flowers to the Wilkerson family.