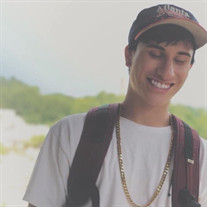 North Augusta, SC &#8211; Services for Cameron Augustus O&#8217;Neal, 22, who entered into rest June 5, 2020, will be held at a later date. Cameron was an avid videographer and enjoyed skateboarding, playing and listening to music, adventures... View Obituary & Service Information

The family of Cameron Augustus O'Neal created this Life Tributes page to make it easy to share your memories.

Send flowers to the O'Neal family.