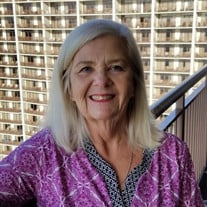 North Augusta, SC—Ms. Cindy Norvell, 67, entered into rest Sunday, January 31, 2021 at her home following a bravely fought battle with ALS. Memorial Services will private. The Memorial Service will be streamed live at the following link Saturday afternoon, February 20, 2021 at 2 o'clock. http://fairviewpreschurch.org/norvell-memorial-service Ms. Norvell was born in Augusta, GA to the late Paul and Nadine Norvell. She was an active member of Fairview Presbyterian Church prior to her diagnosis and was a passionate Jazzerciser even after. Ms. Norvell was a production and control room operator at SRS for over 20 years before retiring in 2011 and was a massage therapist. She enjoyed cooking, traveling, and spending time with her family. She was preceded in death by her sister, Connie Stewart. Survivors include her son and daughter-in-law, Cameron and Kimberly Gilbreath, Graniteville, SC; one granddaughter, Molly Gilbreath; two brothers and a sister-in-law, Bill Norvell, Augusta, GA and Barry and Missy Norvell of Aiken, SC; and many beloved nieces and nephews. She will be greatly missed by her faithful boxer, Joilee. The family request that in lieu of flowers, memorials be made to the SPCA Albrecht Center, 199 Willow Run Road, Aiken, SC 29801, Fairview Presbyterian Church, 1101 Carolina, Avenue, North Augusta, SC 29841 or to the charity of the donor’s choice. Posey Funeral Directors of North Augusta is in charge of arrangements (803-278-1181). Visit the registry at www.PoseyCares.com

The family of Cynthia "Cindy" Norvell created this Life Tributes page to make it easy to share your memories.

Send flowers to the Norvell family.