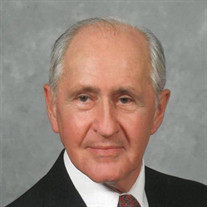 Mr. Donald Roy Geckeler, 92, died March 27, 2022. Mr. Geckeler was a native of Hamilton, Ohio, the son of David Geckeler and Anna Streamas Geckeler, and made North Augusta his home for the past 68 years. He graduated from Hamilton High School and Miami University with two Bachelor's degrees and a Masters degree in Chemistry. In 1951 he married Janet Dyke, also a Miami graduate. They lived in Oxford, Ohio until he and his wife moved to North Augusta when he accepted a position as chemist at DuPont’s Savannah River Plant. He retired from DuPont with 34 years of service. Don was a member of Fairview Presbyterian Church, where over the years he served as deacon, was active in the senior activities, as well as counseled and participated in a program mentoring school children. In his early years, he was an active supporter of Hammond Hills Swim Team. He was a past president of the Star Promenaders Square Dance Club and the Augusta Area Square Dance Association. Don’s interests included gardening, golf, deer hunting, and stamp collecting. He had a gift for gardening and loved the outdoors. He enjoyed growing camellias, orchids, Christmas cactus, and a vegetable garden. His garden not only provided for the family, but was also shared with friends and neighbors. Survivors include his beloved wife of 70 years, Janet Woodbridge Dyke Geckeler; three daughters, Mary Anne Johnson (Bruce), Martha Smith (Ken) and Marjorie Batten; grandchildren: Kathryn Evans (Nathan), Blake Johnson, Sgt. 1st Class Robert Mastroianni Jr. (Sarah), Larry Smith, Abby Malzer (Andrew), April Batten (Timmy Peacock), Eddie Batten (Kim), Jennifer Batten; great-grandchildren, Tony Mastroianni, Jayna Batten, and Bennett Evans; a niece, Tina Jackson (Rick) and their daughter, Kara; a nephew David Geckeler (Kim) and their children, Shawn and Bryan Geckler. Funeral Services will be conducted Saturday afternoon, April 2, 2022, at 3 o’clock in the Posey Funeral Chapel with the Reverend Roger S. Bennett officiating. Interment will follow in Pineview Memorial Gardens. The family will receive friends at the funeral home one hour prior to the service from 2 until 3 o’clock. Pallbearers will be Mr. Geckeler’s grandsons, Sgt. 1st Class Robert Mastroianni Jr., Eddie Batten, Blake Johnson, Larry Smith Jr.; and his granddaughter’s husbands, Nathan Evans, Timmy Peacock and Andrew Malzer. In lieu of flowers, memorials may be made to the Shriners Hospitals for Children, 950 West Faris Road, Greenville, SC 29605 or donate.lovetotherescue.org Posey Funeral Directors of North Augusta is in charge of arrangements (803)278-1181. For those unable to attend, the service will be streamed live at the following link: http://www.poseyfuneraldirectors.com/obituaries/permalink/10428783/LTWebcast

Mr. Donald Roy Geckeler, 92, died March 27, 2022. Mr. Geckeler was a native of Hamilton, Ohio, the son of David Geckeler and Anna Streamas Geckeler, and made North Augusta his home for the past 68 years. He graduated from Hamilton High School... View Obituary & Service Information

The family of Donald Roy Geckeler created this Life Tributes page to make it easy to share your memories.

Send flowers to the Geckeler family.