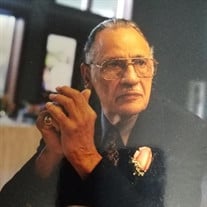 Augusta, GA - George Francis Morin Whitehorne, 105 years old, entered into rest April 2, 2021. Mr. Whitehorne was born in Brooklyn, NY September 2, 1915. Mr. Whitehorne served in the United States Army during World War II stationed in the Pacific. He continued serving after the war as a civilian in the Reserves and as an instructor for the Signal School at Ft. Monmouth NJ and Ft Gordon, GA until his retirement in the 70's. Mr. Whitehorne was a lifelong member of the Episcopal Church singing in the choir, serving as a Lay Reader and on the vestry. In Augusta he attended St. Augustine's and then Christ Church. He could fix anything, build whatever you wanted, was musically gifted and could play numerous instruments including the violin and ukulele. He was also very active in the Royal Scottish Country Dance Society. Mr. Whitehorne was preceded in death by his parents, Aubrey and Florence Whitehorne; sisters, Mary Whitehorne and Pearl (Frank) Zampino; brother, Vivian "Biff"(Edna) Whitehorne and daughter, Catherine Barner. Survivors include his wife of 72 years, Anne D. Whitehorne; brother, Harold (Ellen) Whitehorne; daughters, Mary Helen Polensky (Bill), Lucy Whitehorne; three grandsons Stephen (Angela) Polensky, Eric (Kelly) Shawver, Ross Whitehorne; four great-grandchildren, Quirin Polensky, Finley and Willow Shawver and Daryl Whitehorne; niece Mary Zampino, nephews Chris Zampino, Wayne Whitehorne and Michael Horn The memorial service for Mr. Whitehorne will be held at a later date. Entombment with military honors will take place on Thursday, September 9, 2021, at 10:30 in the morning at the National Memorial Cemetery of the Pacific, Honolulu, HI. See you there! Memorials may be made to Kitty Konnection through the donate button on their website www.kittykonnection.org

The family of George Francis Morin Whitehorne created this Life Tributes page to make it easy to share your memories.

Send flowers to the Whitehorne family.