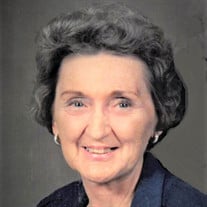 North Augusta, SC- Graveside Services for Mrs. Jeanne Evelyn Burdine Griffin, 93, wife of the late William E. “Bill” Griffin, who entered into rest April 14, 2021, will be conducted Friday morning at 11 o’clock in Pineview Memorial Gardens with Rev. Roy Kiser officiating. The service will be streamed live on the Posey Funeral Directors Facebook page. Those in attendance are encouraged to wear a mask and social distancing will be practiced. Mrs. Griffin was born on April 1, 1928, in Greenville, SC to the late John Mason Burdine and Evelyn Backus Burdine. She grew up in Berea, SC where she graduated from Berea High School. Mrs. Griffin graduated from Furman University with a Bachelor’s in Psychology and Minor in Music. While at Furman, she was a member of the Furman Singers and remained a loyal alumnus throughout her whole life. She was a member of First Baptist Church of North Augusta, a former faithful member of the Sanctuary Choir and was a member of the Homebound Ministry. She was a former volunteer with the Women’s Auxiliary at University Hospital, having served for over 25 years. Mrs. Griffin also served for many years in the Hammond Hills Garden Club. She enjoyed her years at the Pink Dipper with her granddaughters. Mrs. Griffin was preceded in death by her husband, Bill and grandson, John Raybon Griffin. Survivors include her four children; Melissa Griffin, William Griffin and his wife Esther, David Griffin and his wife Angie, all of North Augusta, and Susan Griffin (Tim Boan) of Columbia, SC; three grandchildren, Megan Brunson, Melanie Griffin and Erika Griffin Thompson (Cameron). She is also survived by cousins; Bob Burdine, Berea, SC, Sally Burdine Taylor, Greenville, SC, Lantie Burdine Sandlin, Tigerville, SC, Judy Vaillancourt, Simpsonville, SC, Lee Walker, Simpsonville, SC, Donnie Newman, Greenville, SC and Carol Anderson, Easley, SC. Memorials may be made to the Music Ministry for the Jerry Matthews Scholarship c/o First Baptist Church of North Augusta, 602 Georgia Avenue, North Augusta, SC 29841. The family would like to thank the staff of Brookdale Assisted Living in North Augusta for the loving care and devotion given to Mama. We continue to be very grateful.

The family of Jeanne Evelyn Burdine Griffin created this Life Tributes page to make it easy to share your memories.

Send flowers to the Griffin family.