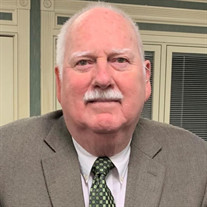 Aiken, SC--Memorial services for Mr. John Barry Christian, Sr., 76, who entered into rest on Sunday, September 5th, 2021, will be conducted Saturday afternoon at 2 o’clock at Hollow Creek Landing, 3043 Silver Bluff Road, Aiken, SC. The service will be by invitation only but will also be hosted on Zoom. The information for how to connect will be provided beforehand. John Christian was a native of Augusta, GA and with the notable exception of some years of his youth when he lived in Miami, Fl, spent most of his life in the Augusta area. He and his wife (or girlfriend as he always called her), Dianne, of 56 years spent most of their married life in North Augusta, SC. John was an elder in the East Congregation of Jehovah’s Witnesses and devoted his life to serving his heavenly father, Jehovah. John was a loving and caring son, husband, father, grandfather, and great-grandfather. In addition to his work as a minister, he drove a truck for several companies over the years, including Railway Express, Brown Transport, Kimberly Clark, Superior Carriers, BOC, and others. In the latter years of his trucking career, he also became a driver trainer. John was a hard worker and skilled craftsman. He built most of his home himself with the help of his two sons and some friends. He repaired his own vehicles and did most everything himself. He believed that anything worth doing was worth doing yourself. Some of this was by necessity and some of it was for the sense of pride and accomplishment that came with taking care of things himself and having the know-how to be self-sufficient. He taught this to his children too, including his daughter. John loved the great outdoors, including camping, hiking, and fishing. When he took his children out for these activities, he never failed to fill them with the awe of creation, and he never failed to give the credit to our creator. He was a joker and liked to kid but couldn’t keep a straight face for very long because of his innate honesty. As long as no Bible principle was involved, John would rather lose an argument, even if he knew he was right, just to keep the peace because, even though he was a big strong man, he was never a bully and would not stand for one. He was kind and gentle and loved giving attention to little children and babies, except for changing diapers. For that he passed them back. Survivors include his wife of 56 years, Dianne Chalker Christian; their 3 children, John Barry (Lorie) Christian, Jr, Jeremy (Teresa) Christian, Tabitha (Aaron) Shelton; eight grandchildren; Kaitlin Christian, Courtney (Jeremy) Newland, Katherine (Nathaniel) Oliver, John Christian III, Jessica Patrick, Elan (Kay) Christian, Natalie Shelton, and Peyton Shelton; ten great-grandchildren; Sophia Oliver, Liam Patrick, Alexander Oliver, Abe Newland, Leland Patrick, Logan Patrick, Keely Newland, Levi Patrick, Freyja Oliver, and Kinsley Christian; and many other nieces, nephews, cousins and dear friends. John was preceded in death by his mother, Maude L. Christian, his father, Robert H. Christian, and his brother Robert “Bob” Christian. Honorary pallbearers will be Jeremy Christian, Barry Christian, John Christian III, Elan Christian, Aaron Shelton, and Robert Williams. Posey Funeral Directors of North Augusta is in charge of arrangements (803.278.1181). Visit the registry at www.POSEYCARES.com

The family of John Barry Christian Sr. created this Life Tributes page to make it easy to share your memories.

Send flowers to the Christian family.