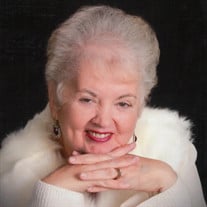 Beech Island, SC—Martha Henry Butts, 69, of Beech Island, South Carolina, beloved wife of Richard, passed peacefully into the Arms of JESUS on August 9, 2020. Funeral Services will be held Thursday morning at 10 o’clock from Matlock Baptist Church. Rev. Dale Reeves and Dr. E. Finley Limehouse officiating. Interment will follow in Wesley Chapel UMC Cemetery. The service will be streamed live at https://www.facebook.com/matlockbaptist/ A native of Bulloch County, Georgia, Martha moved to the CSRA in order to pursue her passion for education. Mrs. Butts taught school for 37 years, the majority of which were spent at North Augusta High School, where she was a fixture at the school and in the community. Born in Vidalia, Georgia, Martha was the daughter of John and Evelyn Henry. Mrs. Butts is survived by her beloved husband of 45 years, Richard Butts; her only child, John (Michelle); her precious grandchildren, Nicholas and Katie; her sister Dale Groover (Gilbert); her brother-in-law, Kenneth Butts (Traci); another brother-in-law, Michael Butts; many treasured nieces and nephews, and a much-loved extended family. A graduate of Georgia Southern College (now University), Mrs. Butts earned Bachelor’s and Master’s degrees in English Literature. While she was teaching, and after her retirement, she also helped local students gain their degrees at Southern Wesleyan University’s North Augusta Campus. Martha was a phenomenal educator. She loved all of her students. Her smile could light up a room, but you could hear a pin drop while she was teaching. Mrs. Butts spent the majority of her time as an educator at North Augusta High School, where she taught “British Literature,” “Advanced Composition,” “Spanish Language,” and served with the International Baccalaureate Programme as the “Extended Essay Coordinator.” She also oversaw and taught the “Teacher Cadet” course through The University of South Carolina at Aiken for seniors who wished to pursue a career in the field of Education. Over the years, Mrs. Butts was a mentor to countless students, many of whom later became personal friends. Martha Butts was a woman of many talents. From editing formal documents, to writing numerous letters of recommendation for her students, to serving as a hostess for bridal and baby showers, and playing piano at weddings and funerals, Martha enjoyed giving of her time and her talents. Her interests were wide and varied. She also loved to travel, especially to the mountains, and she enjoyed taking her grandchildren to the beach. Martha enjoyed shopping trips and lunch outings with her friends. While devotion to friends was paramount, family meant everything to her. Christmas was Martha’s favorite time of year. Her giving spirit was most associated with this joyous holiday. At North Augusta High School, she and her Teacher Cadets organized a school-wide project which included a toy and clothing drive for local families in need. Each year, the entire school gathered to enjoy the Christmas Program, where gifts were displayed, the band played, and Martha served as “Mrs. Claus.” Music was Martha’s favorite language. A gifted pianist, Martha was always at peace when she played, whether alone, or for others. When she played the piano, Martha seemed to be in another world, and it was clear that this was when she felt closest to the LORD. Martha often ministered to others by recording her music and gifting those who were unable to attend church services. Martha was a devout Christian. Over the last 8 ½ years, she fiercely and courageously battled a number of extremely serious health issues. Throughout her life and especially during her many illnesses, Martha never wavered in her faith or questioned GOD’S will for her life. She was brave; she was kind; she was always hopeful. She was a warrior. With GOD’S grace and her faith, Martha won her battle on her own terms. Posey Funeral Directors of North Augusta in charge of arrangements (803.278.1181). Visit the registry at www.POSEYCARES.com

The family of Martha H. Butts created this Life Tributes page to make it easy to share your memories.

Send flowers to the Butts family.