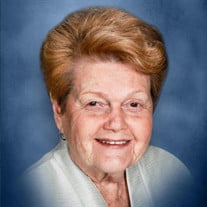 NORTH AUGUSTA, SC -- Funeral Services for Mrs. Mary Senn Holloway Sexton, 96, who entered into rest on March 1, 2021, will be conducted Sunday at 2 o’clock from the Grace United Methodist Church. Rev. Thomas B. Wilkes, III, Dr. John M. Younginer, Jr., and Dr. T. Joseph Lusk officiating. Private interment in Hillcrest Memorial Park. We encourage those attending to wear a mask, and social distancing will be practiced. For those who are unable to attend, the Funeral Service will be streamed live on Posey Funeral Directors Facebook page. Mary Osteen Senn Holloway Sexton was born May 1, 1924, in Atlanta, GA, but was raised in Willacoochee, GA, by her parents Maude and Riley Osteen. She attended South Georgia College for one year before going to Brunswick, GA, to work in the Shipyard Tool Supply Office during WWII. Moving to Augusta, she found work at Southern Construction Company as a bookkeeper and office manager until they closed in 1972. Mary then worked with Southern Roofing until retirement. Mary belonged to American Business Women of America, and, in 1961, was named one of the Top 10 Business Women of the Year in the U.S. During retirement, Mary was a circle and garden club member who loved to travel across the U.S. and abroad. She was an active member of Grace UMC and her beloved Stillwell Sunday School Class until her death. Her favorite past-time was her yard. Mary was also a true and loyal friend; if you entered her backdoor, you would be fed. In Augusta, Mary met and married Thompson B. Senn, Jr., and the couple welcomed 4 children: Kerry, Michael, Philip and Mark. Tom died in 1953, and Mary raised her children with the help and loving care of Ardie Elizabeth Key. Although working full time, she never missed any activity in which her kids were involved. The year 1976 brought growth to Mary’s family, when she married James W. Holloway, gaining 3 children to love: Ann (Bill) Anderson, Joyce (Lee) Wetherington, and Danny (Marilyn) Holloway. That same year, Mary’s son Philip married Karen Farris, whom Mary considered a daughter more than a daughter-in-law. Jimmy passed away in 1997, but the love for his children has never wavered. At 78, Mary married Cecil “Monty” Sexton from Colorado. What a wonderful 10 years they had travelling across the country between Colorado, Montana, and South Carolina! Monty’s son, Pat (Karen) Sexton, and his family have been a loving addition to Mary’s. Mary’s greatest joy and proudest moment was the welcoming of grandchildren: Brantley, Mary, and Christopher (Stephanie) Senn; Patrick Senn and Danielle (Dallas) Sessions; Justin Moran, Britt (Tony) Reese; Dan (Holly) Holloway, Krista (Jeremy) Jiunnies, Whitney (Casey) Thompson, Lara (Robert) Lewis, Jon Hixon, Ashley (Jeremy) Herrington, and Jennifer Wetherington. Her joys were multiplied with 23 great-grandchildren. Pallbearers will be Christopher Senn, Brantley Senn, Justin Moran, Jon Hixon, Patrick Senn and Dan Holloway. Posey Funeral Directors of North Augusta is in charge of arrangements (803-278-1181). Visit the registry at www.PoseyCares.com

The family of Mary Senn Holloway Sexton created this Life Tributes page to make it easy to share your memories.

Send flowers to the Sexton family.