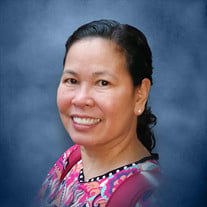 Tess (Teresita) Llego Suaybaguio Wendorf, 56, of Martinez Georgia, left us to continue her mission with family and friends in the next life on March 6, 2022 after a lengthy illness. She was supported and encouraged by many of her friends on staff at August University Cancer Center as well as the Bone Marrow Transplant ward Augusta University Hospital. Tess was born on September 3, 1965 in Lucena City, Quezon, Philippines to the late Olimpio Leria Suaybaguio and Crispina Abadilla Llego Suaybaguio. She is also preceded in death by her brother, Anastacio “Tasoy” Llego Suaybaguio (Nona); a sister Guillerma “Emma” Llego Suaybaguio Malundas (Kibuk). Tess is survived by her husband of fourteen years, Richard Glen Wendorf. They were married on the first day of Spring, March 20, 2008, in the LDS Atlanta Georgia Temple in Sandy Springs, Georgia. She was an active member of The Church of Jesus Christ of Latter-day Saint and served as a temple worker in both the Manila Philippines and Columbia South Carolina Temples. Tess loved making a home, learning new recipes, being with her family and friends and sharing the Gospel with others, doing genealogy as well as temple work. Whenever she had the opportunity, Tess could be found taking photos or traveling around the world, having visited Taiwan, 49 of the 50 states and several European countries. Prior to her illness, Tess served as a Medical Records Technician at the Dwight D. Eisenhower Army Medical Center at Fort Gordon. In addition to her beloved husband, she is survived by four brothers, Eduardo “Dando” Llego Suaybaguio (Malyn), Bernardo “Bernard” Llego Suaybaguio (Nini), Renato “Atong” Llego Suaybaguio (Naneth), Benedicto “Benny” Llego Suaybaguio (Marj); three sisters, Victoria “Toyang” Llego Suaybaguio Diolata (Vincente), Gloria “Glo” Llego Suaybaguio Bobadilla (Eddie), Divina Gracia “Beng” Llego Suaybaguio; eleven nieces and nephews; several grand-nieces and nephews, all of the Philippines. Tess is survived by seven loving stepchildren, Jessica Wendorf Oliveira (Wagner), Dr. Arthur Wendorf II (Ashlee), Sarah Wendorf, August Wendorf (Elizabeth), Emma Wendorf Maxwell (Cassidy), Anna Wendorf and Kristina Wendorf Kopsch (Kai); as well as seventeen step-grandchildren. Funeral Services for Tess will be conducted Saturday afternoon, March 12, 2022, at 2 o’clock at The Church of Jesus Christ of Latter-day Saints, 835 N. Belair Road, Evans, GA 30809. President Jason Jones conducting. The service will be streamed live to the Posey Funeral Directors Facebook page. The family will receive friends at the church immediately following the service until 4 o’clock. Per her wishes, Richard will be taking Tess back to her home in the Philippines for her burial. In lieu of flowers, memorials may be made to The Church of Jesus Christ of Latter-day Saints, Humanitarian Aid Fund, c/o Bishop Greg Packer, 803 Dover Court, Grovetown, GA 30813. Posey Funeral Directors of North Augusta is in charge of arrangements (803)278-1181.

Tess (Teresita) Llego Suaybaguio Wendorf, 56, of Martinez Georgia, left us to continue her mission with family and friends in the next life on March 6, 2022 after a lengthy illness. She was supported and encouraged by many of her friends on... View Obituary & Service Information

The family of Tess S. Wendorf created this Life Tributes page to make it easy to share your memories.

Send flowers to the Wendorf family.