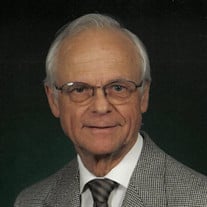 North Augusta - Wayland Edward Wilcox, 83, beloved husband of Dorothy Elizabeth Sumner Wilcox, passed away peacefully at the NHC Nursing Home in North Augusta on Monday, September 27, 2021, following an extended illness. Memorial Services will be held Thursday afternoon, October 7, 2021, at 5 o’clock in the chapel of Posey Funeral Directors with Rev. Masaki Chiba officiating. The family will receive friends at the funeral home following the service. Interment will be held at Riverview Cemetery, Oxford, NY at a later date. Wayland was born in Oxford, NY and was the son of the late Julian Jay Wilcox and Ethel Ruth Foote Wilcox. He was Oxford Academy’s valedictorian of the class of 1956. He received a NROTC scholarship and attended Cornell University, played trumpet in the Big Red Band and received his commission in the United States Navy in 1960. He retired as a Commander after serving for 26 years as a naval aviator, including serving in the Cuban Missile Crisis and the Vietnam War. After retirement from the U.S. Navy, he returned to college, attending Pennsylvania State University, and earned a degree in agricultural economics. He was a passionate supporter of PSU, attending athletic events and representing the University at college fairs. Mr. Wilcox was raised in the Congregational Church and a member of Presbyterian churches wherever he lived, most notably the Roswell (Georgia) Presbyterian Church, where he was a long-time member of the choir and brass ensemble. He volunteered through Junior Achievement where he mentored and taught students to succeed in economics. He was preceded in death by a brother Julian Wilcox, Jr. In addition to his wife, survivors include his children, Sherrill Edward (Karen) Wilcox of North Augusta, SC and Shirley Elizabeth (Kevin) Cooke of Princeton, NJ; his grandsons, Austen (Hillary) Wilcox, Garrison (Jennifer) Wilcox and Duncan (Lindsey) Cooke; his brothers Duane (Nanette) Wilcox of Sherburne, NY, Francis Wilcox and Lawrence (Suzanne) Wilcox, both of Oxford, NY; a sister-in-law, Virginia Wilcox of Walton, NY; and a number of nieces and nephews. Due to Wayland’s devoted support of veterans, in lieu of flowers, donations may be made to the Wounded Warrior Project at www.support.woundedwarriorproject.org or USO at www.uso.org. Posey Funeral Directors of North Augusta is in charge of arrangements (803) 278-1181. Visit the registry at www.PoseyCares.com.

The family of Wayland Edward Wilcox created this Life Tributes page to make it easy to share your memories.

Send flowers to the Wilcox family.