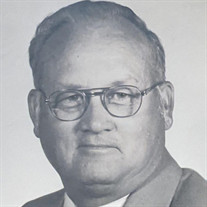 North Augusta, SC – Graveside Services for William Norman “Bill” Faucett, 91, North Augusta’s Mr. Fix-It, who passed away December 27, 2021 at Benton House Aiken under the care of Trinity Hospice will be conducted Thursday afternoon at 1 o’clock in Jonesville Memorial Gardens, Jonesville, SC. Born Nov. 17, 1930, in Union County, S.C., to Norman and Helen “Estelle” Faucett, he was the second oldest of seven children. He worked the family farm in Pearidge, S.C., until he graduated from Kelly Pinckney High School. After graduation, he worked for a local cotton mill in Chester for two years. Drafted into the U.S. Army in 1951, he served a year in Germany as a mechanic. Despite several offers to re-enlist, he returned to the U.S., where he took a job at the Savannah River Site, working through various positions until he became foreman of the machinist shop. He was the go-to man anytime the plant needed a part created. He retired from SRP in 1989 when Dupont left. Working at the SRP was his day job. In the evenings and on weekends, he rebuilt cars and fixed broken appliances, bicycles, motorcycles, cars, microwaves, vacuum cleaners, and other items for people throughout North Augusta, Aiken, and Augusta. Folks in the area knew that if anyone could fix it, Bill Faucett could. If someone had a car problem, he could drive it around the block and diagnose the problem on the spot. He needed to stay busy from sunup to sundown and was always working on a project. He rebuilt his house on West Forest Avenue, adding bedrooms for his sons, a shop and a bathroom. A few years after retirement, he and his wife, Connie, moved to Fernandina Beach on Amelia Island, Fl., where they enjoyed walks on the beach, collected shark teeth, and spent time with their family. They moved back to North Augusta after a few years. He was preceded in death by his wife, Connie; his parents; brothers Jimmy and Lynn, and sisters Evelyn and Shirley. Survivors include his daughter and son-in-law, Diane and Michael Thompson of Columbus, Ga.; a son and son-in-law, Andy Faucett and Richard Fogaley of Riverside, Pa.; a son and daughter-in-law, Chris and Debbie Faucett of Spartanburg, S.C.; a granddaughter, Emily Thompson Wright; great-granddaughter Lulu Witten and great-grandson Ford Wright; a sister, Margie Robinson; a brother, Fred Faucett; and several nieces and nephews. Bill Faucett loved cars, the faster the better; and appreciated good-looking women, coconut cake, coconut custard pie, and sweet potato pie. Memorials may be made to National FFA Foundation, 6060 FFA Dr., P.O. Box 68960, Indianapolis, IN 46268-0960 or a local Technical School.

The family of William "Bill" Norman Faucett created this Life Tributes page to make it easy to share your memories.

Send flowers to the Faucett family.