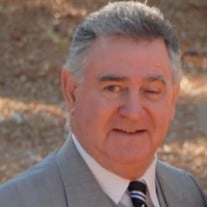 Columbia, SC—A Celebration of Life for Mr. Carl W. Ward, 76, who entered into rest December 4, 2021, will be conducted Wednesday afternoon at 2 o’clock in the Posey Funeral Chapel with Chaplain Dexter Lambert officiating. Interment in Sunset Memory Gardens with Veteran Honors. The family will receive friends at the funeral home one hour prior to the service. For those who are unable to attend, the service will be livestreamed at http://www.poseyfuneraldirectors.com/obituaries/permalink/10269776/LTWebcast. Mr. Ward was a native of Aiken, SC, a former resident of Clearwater, SC, having made Columbia, SC his home for over 40 years. He graduated from LBC High School in 1963, attended the University of Tennessee before being drafted to serve in the 1st Calvary, 12th Division. He was injured and sent to Japan and then to Walter Reed Hospital. He received two Purple Hearts for his injuries and an Honorable Discharge for his dedicated service. He later graduated from the University of South Carolina, attended Luther Rice Seminary, and received his Doctor of Ministry from Southern Baptist Center for Biblical Studies. Mr. Ward retired as a scheduler from the VA Regional Office and was a member of Clearwater First Baptist Church. He was an avid Carolina Gamecock Fan, enjoyed listening to “60’s Music” and shopping online. He was preceded in death by his parents, Fred Carl Ward and Novice Grace Beard Ward. Survivors include his wife of nine years, Sandy McAfee Ward, one son, Wendell (Lucinda) Ward, Chesapeake, VA; one grandson, Jaylen Ward, two brothers, Kenneth (Diane) Ward and Kevin Ward, all of North Augusta, SC; two sisters, his twin sister Carol (Joe) Brock, Columbia, SC and Kay (Wayne) Loper, Panama City, FL; a number of nieces and nephews. Pallbearers will be Bruce Attaway, Sr., Steve Smith, Corky Loper, Craig Loper, Travis Ward and Trevor Ward. Memorials may be made to the Wounded Warrior Project at https://support.woundedwarriorproject.org/ Posey Funeral Directors of North Augusta is in charge of arrangements (803-278-1181). Visit the registry at www.PoseyCares.com

The family of Carl W. Ward created this Life Tributes page to make it easy to share your memories.

Send flowers to the Ward family.