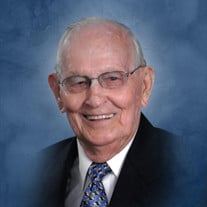 North Augusta, SC – Funeral Services for Charlton T. “Andy” Anderson, 86, who entered into rest February 20, 2020, will be conducted Sunday afternoon at 2 o’clock from the Posey Funeral Chapel with Dr. William F. Harrell and Dr. Warren W. Burnham officiating. Interment will follow in Pineview Memorial Gardens with Veterans Honors. The family will receive friends at the funeral home Saturday evening from 5 until 7. Mr. Anderson was a native of Glenwood, Georgia, resided in Macon, Georgia for 62 years, prior to moving to North Augusta in 2002. While living in Macon, he was a former member of Lawrence Drive Baptist Church and Williamson Road Baptist Church where he served as a Deacon, Church Treasurer and Sunday School Teacher. After relocating to the CSRA he joined Abilene Baptist Church and later became a member of the First Baptist Church of North Augusta and the Christ in Us Sunday School Class. Mr. Anderson was a dedicated Christian and enjoyed spreading the gospel to those he came in contact with. He was a United States Navy Veteran, retired from Robins Air Force Base and later became Evening Visitation Manager at Snow’s Memorial Chapel. He will always be remembered as being a loving husband, father and granddaddy. He was preceded in death by his father, W. L. Anderson; mother, Evie Wood Chaffin; stepfather, Bob Chaffin and a brother, Kenneth Anderson. Survivors include his wife of 63 years, Margie H. Anderson; his son and daughter-in-law, Rusty and Donna Anderson; a granddaughter and her husband, Jesslyn and Zach Pearson; a great granddaughter, Evie Diane Pearson; a sister, Sharon Tidwell of Titusville, FL; sister-in-law, Dale Anderson of Lakeland, FL and several nieces and nephews. Pallbearers will be Rusty Anderson, Tony Tidwell, Tim Tidwell, Troy Tidwell, Zach Pearson and Eddie Holder. Memorials may be made to First Baptist Church North Augusta Next Chapter 2.0, 625 Georgia Avenue, North Augusta, SC 29841.

The family of Charlton T. "Andy" Anderson created this Life Tributes page to make it easy to share your memories.

Send flowers to the Anderson family.