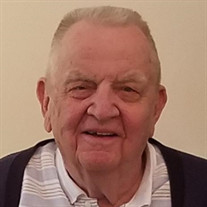 Lt. Col. David Raymond Mets, U.S. Air Force, Retired Aiken, SC – Services for Lt. Col. David Raymond Mets, U.S. Air Force, Retired, will be conducted at 1:00 pm on January 6, 2020 at Barrancas National Cemetery, Pensacola, Florida. He entered into rest on December 29, 2019 at the age of 91 with family by his side. He has lived in Aiken, SC for the last five years. David is known for his integrity and distinguishable commitment to his family and the nation. Lt. Col. Mets was born February 20, 1928 in Teaneck, NJ to the late Rudolph and Mary (Ojala) Mets. He graduated from Quincy High School, Quincy, MA. Upon graduation he enlisted in the United States Navy and became an Electronics Technician. In 1948 he enrolled at the U.S. Naval Academy Preparatory School and went on to graduate from the United States Naval Academy in 1953 with a Bachelor of Science degree in Engineering. He was commissioned into the U.S. Air Force and became a Navigator, flying missions throughout Europe and Northern Africa before attending Pilot School. Upon completion of Pilot School his first assignment was as a Flight Instructor training other pilots in the B-25. In 1962 he earned a master’s degree in History from Columbia University and became a Professor of History at the United States Air Force Academy. During this time, he began doctoral studies, later earning a Ph.D. in History from the University of Denver. In 1968 he started his first tour in Vietnam as a C130 pilot moving supplies and equipment around southeast Asia to support U.S. combat efforts. More than once he came home with bullets in his airplane. One time he dodged a rocket attack by crawling across the ground, finally reaching his plane to hurriedly take off safely with his crew. Returning to the U.S. he taught as a History Professor, this time at the United States Military Academy – West Point. In 1974 he returned to Vietnam for a second tour as a pilot where he flew the weaponized C130 Gunship. In 1975 David was stationed at Maxwell Air Force Base, Montgomery, Alabama until his retirement from the Air Force in 1979 to Niceville, Florida. He began a second career as a military history professor, and he co-founded the School for Advanced Aerospace Studies (SASS) and served as a professor for the first 13 graduating classes. He wrote and published many books on air power, technology, NATO and military icons. David worked full time beginning at age 14 until he was nearly 86, having earned a paycheck for some 71 years. In addition to his parents, Lt. Col Mets was preceded in death by his wife of 61 years, Dorothy Marion Mets and a sister, Janet. Survivors include three sons, Joseph Stanley Mets, Michael David (Mindy) Mets and David Matthew (Mary) Mets; a daughter, Evelyn Marion Mets; seven grandchildren, Joseph Michael (Patricia) Mets, Steven Mitchell Mets, Christopher Casey (Brianna) Mets, Catherine Kelly Mets, David Ryan Mets, Gordon (Kelly) Olwell and Melissa (Arash) Saberi; six great grandchildren and a brother, Wayno (Wendy) Mets. Memorials may be made to United States Naval Academy Experiential Leadership Development or the Stockdale Center for Ethical Leadership programs (www.usna.com/give). Posey Funeral Directors of North Augusta is in charge of arrangements (803-278-1181). Visit the registry at www.PoseyCares.com