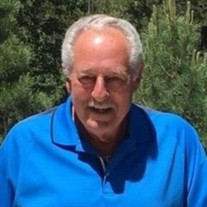 Mark Ira Metz, age 74, passed away Thursday, July 22, 2021 at his home in Diamondhead, MS with his family at his bedside. Mark was born in Queens, NY and then moved to Brooklyn, NY in 1953. He is preceded in death by his parents, Seymour and Phyllis Metz. He is the oldest of 3 children and is survived by his brothers, Jeff Metz (Kim) and Howie Metz (Lorie) who live in Denver, CO. Mark is survived by the love his of life, Linda Metz whom he married in 1997; their children, Brad Metz (Christy), Blake Metz (Adriane), Robert Petrie (Debbie) Rebecca Kurtz (Rob); 8 grandchildren, Lauren Metz, Bryce Metz, Tyler Petrie (Maggie), Jamie Petrie, Jacob Petrie, Brooks Kurtz, Parker Kurtz, and Houston Kurtz. Mark was a Tech Sargent; Retired USAF major duty was communications in service. After retirement he worked in sales. He enjoyed playing baseball and was on the Air Force Flyers Baseball Team for his first 6 years of service. Worth noting, Mark tried out for the NY Yankees at age 17 and made it through the first 2 days but fell to make the cut on 3rd day. Even though, he did not make the team, what an honor. He loved sports, especially Golf, Hockey and Bowling, he played with several groups in Diamondhead, MS as well as other groups while living in North Augusta, SC, Baton Rouge, LA, and Waycross, GA. Mark appeared to have a hard shell but was really a teddy bear. He was Papa to the grandchildren and was a kind, loving devoted husband and happy man. He loved to make people laugh and loved to teach whether it was cards to the little grands or golf to the older grands. He loved his TV programs and Country and Gospel Music. A visitation will be held on Saturday, July 31, 2021, at 9:30AM until 11:00AM at Sweetwater Baptist Church, 198 Sweetwater Rd, North Augusta, SC 29860. A funeral service will be held at 11:00AM following the visitation at the church. The service will be streamed live using the following link https://vimeo.com/event/25145. A burial will follow the service at Sweetwater Baptist Church Cemetery. Memorial contributions can be made to the donor’s choice or to Pancreatic Cancer Research.

Mark Ira Metz, age 74, passed away Thursday, July 22, 2021 at his home in Diamondhead, MS with his family at his bedside. Mark was born in Queens, NY and then moved to Brooklyn, NY in 1953. He is preceded in death by his parents, Seymour and... View Obituary & Service Information

The family of Mark Ira Metz created this Life Tributes page to make it easy to share your memories.

Send flowers to the Metz family.