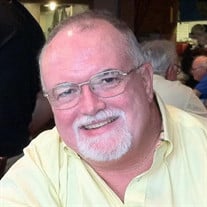 Michael W. Scott Aiken, SC – Funeral Services for Mr. Michael W. Scott, 67, who entered into rest November 14, 2021, will be conducted Thursday morning November 18, 2021, at 11 o’clock from the Historic First Baptist Church of Beech Island. Rev. Dr. Andrew Menger and Rev. Greg Williams officiating. The family will receive friends at the church one hour prior to the service. Interment will follow in Pineview Memorial Gardens. The family respectfully encourages those in attendance to wear a mask and socially distance where possible. Mr. Scott was the son of Jewel Croft Scott of Graniteville, SC and the late Cleveland Scott, Sr. He was a graduate of Leavell McCampbell High School and went on to graduate from Carson Newman University, majoring in Sociology and Church Music. Mr. Scott was a member of Historic First Baptist Church of Beech Island, where he served as music director for nearly 40 years. He also served as an ordained deacon, a Sunday school teacher and was on various committees throughout the years. Mr. Scott worked for the Graniteville Company for 30 years, later worked for Kimberly-Clark for 18 years and retired in March of 2021 from Strickland Technical Services as a contract employee. He was married to his beloved wife and sweetheart, Renee Brazier Scott. They would have celebrated their 34th wedding anniversary on November 27th of this year. Mr. Scott’s favorite things include vacations at the beach and cheering on the South Carolina Gamecocks. In addition to his wife, survivors include a son, Ben Skinner (Kristen); his mother, Jewel Scott; his siblings Anne Scott Burckhalter (Jim), Esther Scott Grant, Forrest Scott Jr., Jimmy Scott (Lib), Johnny Scott (Donna) and Roger Scott; and numerous nieces, nephews and cousins. Additionally, he was preceded in death by a baby sister, Sarah. Pallbearers will be Jeremy Maney, Joe Morris, Tyrone Williams, Brandon Burckhalter, Tyler Burckhalter and Brian Miles. In lieu of flowers, memorials may be made to the McKinnon Music Fund at Historic First Baptist Church of Beech Island, 170 Church Road, Beech Island, SC 29842. Posey Funeral Directors of North Augusta is in charge of arrangements (803)278-1181.

The family of Michael W. Scott created this Life Tributes page to make it easy to share your memories.

Send flowers to the Scott family.