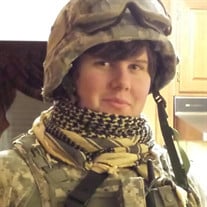 North Augusta, SC – Private Funeral Services for Mr. Nicholas Patrick “Nick” Melton, 22, who entered into rest August 23, 2020, will be conducted from the Posey Funeral Chapel with Mr. Neal Folger officiating. The public is invited to view the service Friday morning at 11 o’clock via livestream on the Posey Funeral Directors Facebook page. A Public Graveside Service will be conducted Friday at 12 noon in Pineview Memorial Gardens. The family will receive friends at the graveside following the service. Nicholas was a lifelong resident of North Augusta and a member of the First Baptist Church of North Augusta. He was a firearms enthusiast and an aspiring gunsmith who loved the outdoors. Nicholas enjoyed fishing, was an avid fan of the Georgia Bulldogs and Star Wars collector. He was a military history buff, especially of the World War II and Vietnam War eras and was the proud owner of an original M1 Garand rifle. Nicholas had the most empathetic heart of anyone you would ever meet and was known by his family and friends for having an “Old Soul.” He dedicated his life to Christ, being baptized at a young age and will be fondly remembered as a true Christian, who loved the Lord. Nicholas battled a rare form of cancer, Pheochromocytoma, and other health conditions for many years. He attributed his longevity to the outpouring of prayer and love through a healing service, where over 600 people were in attendance from many churches in North Augusta, coming together as the body of Jesus Christ. During this healing service, Nicholas became the first youth to be anointed at his church. He was preceded in death by his paternal grandparents, Hershal H. and Verba C. Melton; his maternal grandfather, Lewis Patrick Powell; and favorite uncle, Louis Patrick Powell, Jr. Survivors include his parents, Mark and Sharon Melton; a sister Olivia Lauren (Brandon) Hardy; a brother, Jeff Melton; his maternal grandmother, Mary Lois Powell; an aunt, Lisa Ann Powell; a special friend and mentor, Suzanne Lowe. The family wishes to express their sincerest appreciation to those who tirelessly cared for Nicholas during his health battles; Dr. Robert West, Dr. Randy Cooper, Dr. Robyn Hatley, Dr. Charles Howell, Dr. Walter Pipkin, and his counselor, April Hill. Pallbearers will be Sherman Green, Jonathan Hood, Brock LaDonne, Kyle Little, David Reed and Lee Weng. In lieu of flowers, memorials may be made to First Baptist Church of North Augusta – Children’s Learning Center, 625 Georgia Avenue, North Augusta, SC, 29841. Posey Funeral Directors of North Augusta is in charge of arrangements (803)278- 1181.

The family of Nicholas Patrick "Nick" Melton created this Life Tributes page to make it easy to share your memories.

Send flowers to the Melton family.